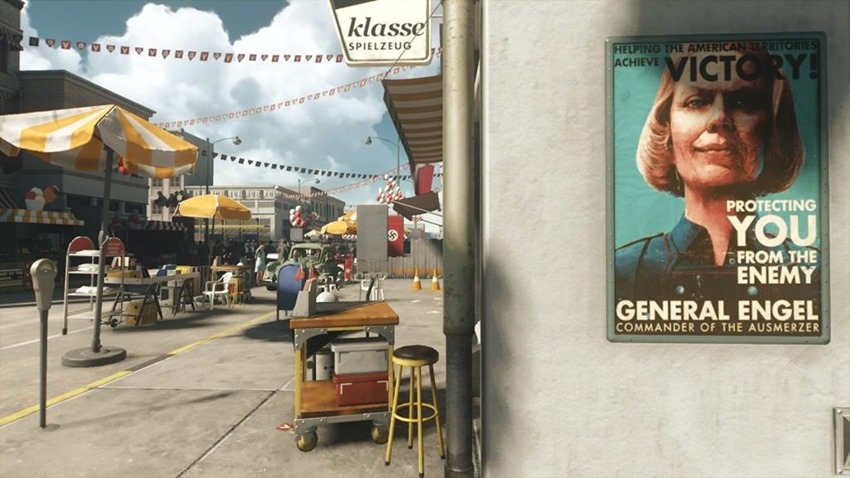 Wolfenstein II: The New Colossus is a bloody good shooter and a hell of a story to play through. Released a year ago with the kind of timing that could only be described as transcendental, Wolfenstein II’s focus on utterly bludgeoning Nazis across the US of A during a period of time where the a new wave of fascism has grown in the land of the not-so-free felt poetic on launch. 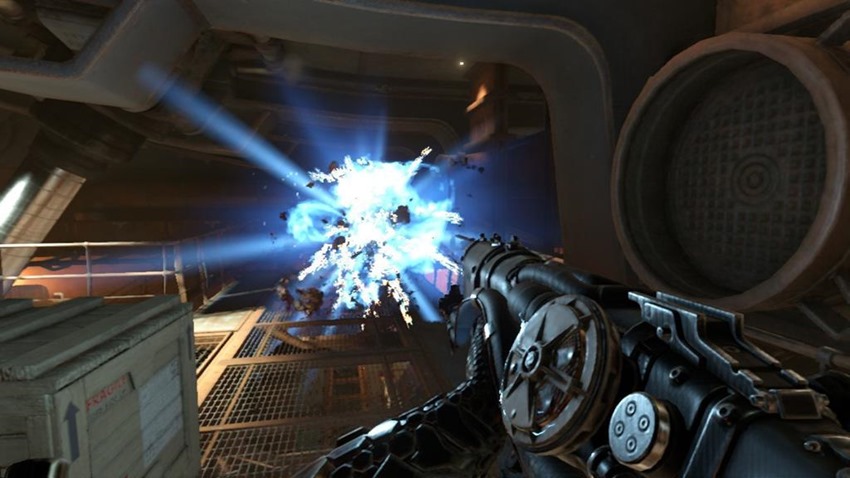 There was more to Wolfenstein II than just guns-akimbo action of course, as the game’s focus on racism, fascism and the flatout brutality of the Nazi war machine that had rooted itself in the USA was a surprisingly tender game when you examined it closely. BJ Blazkowicz was a broken man, a soft-spoken soldier who had barely survived a personal war and found himself up to his neck in a new conflict that had left him shattered as The New Colossus examined the past of the iconic freedom fighter that the Germans had labeled as “Terror Billy”. 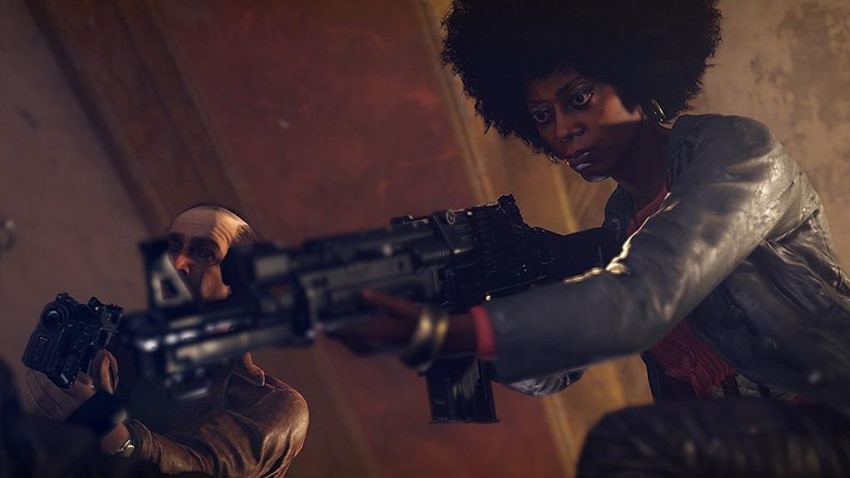 What if you weren’t looking for a touching story of heroism and sacrifice though? What if you all you wanted, was a screen of Nazis, plenty of guns and gorgeous new stages within which to unleash some allied ammo on the Axis powers? Buddy, Wolfenstein II had you covered and then some. Fast forward a year, and the real question is if Wolfenstein II can sustain that momentum on the Nintendo Switch. 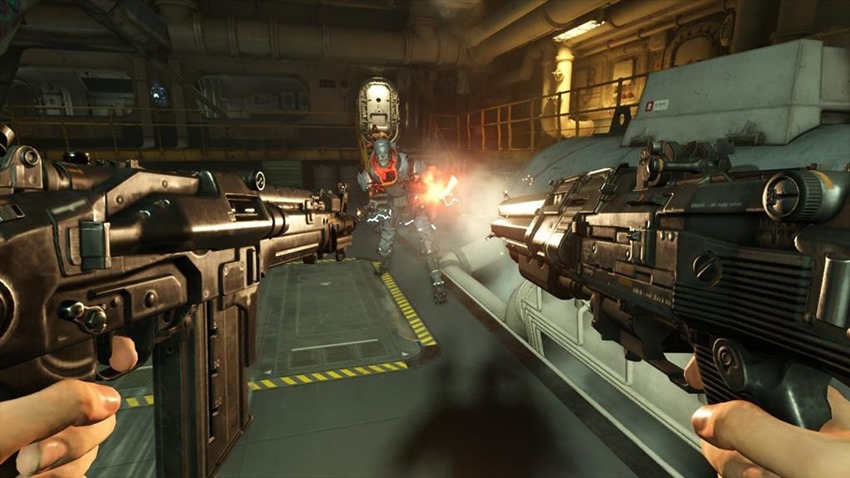 While the Big N’s console is no hardware slouch, Wolfenstein II is still a case of compromises in favour of performance. Similar to the port of 2016’s DOOM, developer Panic Studio had a hell of a task ahead of them. The end result is a game that may look like a German-branded potato in your hands, but exceeds expectations by retaining the very essence that made Wolfenstein II so memorable. 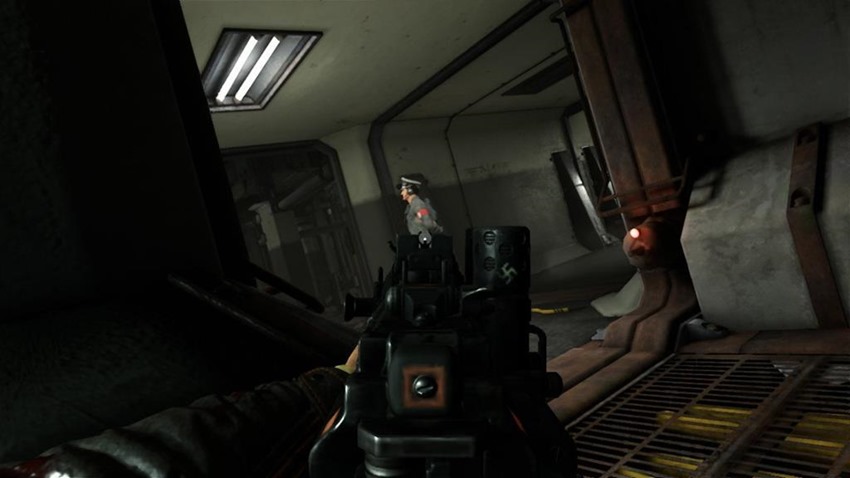 There’s no getting around some of the tricks used to pull out a miracle of design here, whether it be the excision of modern-day visual effects such as dynamic lighting or anti-blur technology. Some stages have some new elements added to them to make processing on the Tegra chip a little bit more manageable, but it works! Every single stage from Wolfenstein II is as massive as you remember it, as Panic Studio’s efforts have managed to translate the full Wolfenstein II experience to the Switch.

Wolfenstein II may have had to sacrifice a lot of its image quality to achieve this, but it’s well worth it for a game that pushes frame-rate optimisation over resolution. Undocked, Wolfenstein II is still a meaty beast to play, hardly ever dropping a frame beyond the more explosive setpieces and barreling through every other obstacle in your way across a game that is largely locked to 30fps in action. 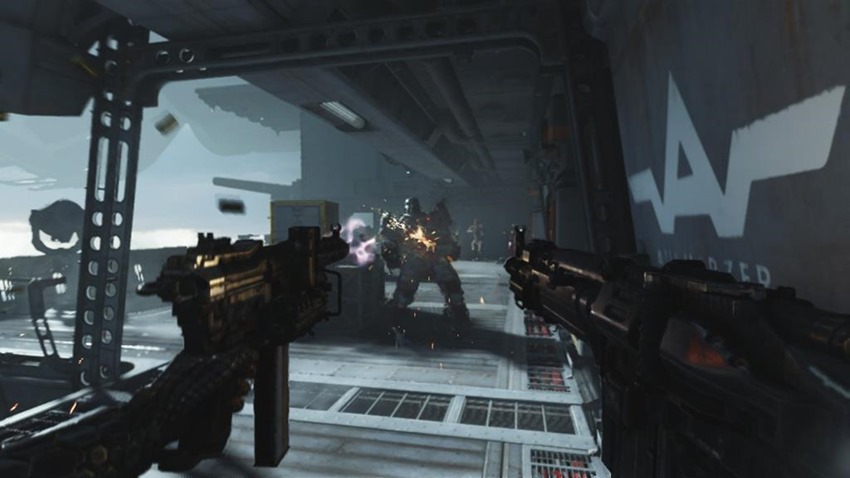 Docked and on a big screen, Wolfenstein II looks passable, if you can get around some very jagged edges, even more blurry details and an odd depth of field. Still, anyone buying the game is most likely looking to blast Nazis while on the go, and the fact that Wolfenstein II manages to achieve this with a complete experience speaks volumes for the work that Panic Studio has done on the port.

Full review of the PS4 version of Wolfenstein II, below: 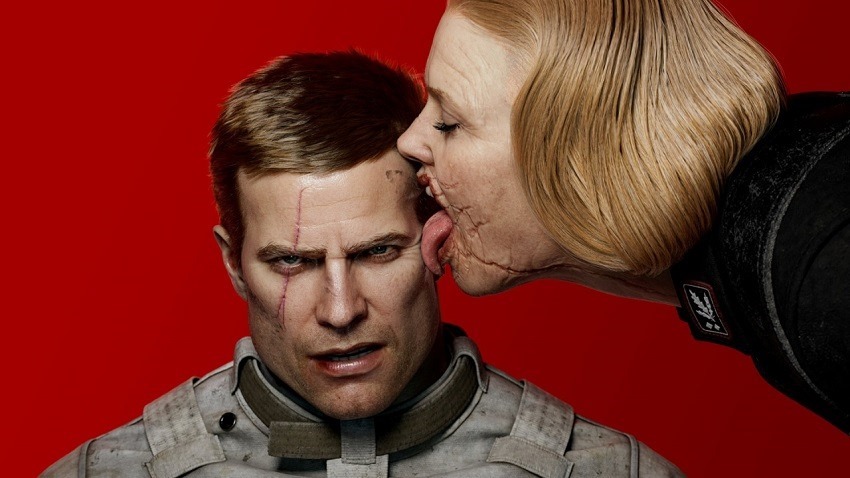 It wasn’t supposed to be this way. World War 2 was meant to end in a decisive victory for the Allied Forces as history’s single greatest monster was finally overthrown and the tide of right-wing hatred failed to halt the advance of a global resistance to the so-called Aryan dream. Instead, Wolfenstein: The New Order painted a grimmer picture.

On a canvas of high-stakes action and impressive showdowns, it was the Nazis who came out on top thanks to their plundering and application of secret technology that was centuries ahead of any other nation on the planet. In a world where having the Reich attitude was encouraged, all you could count on was one man with a gun to resume a fight that had begun a decade and a half ago. 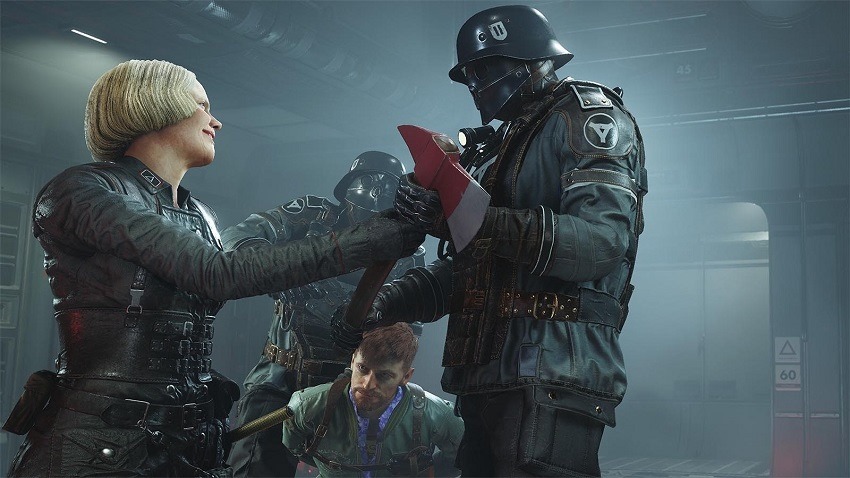 A man whose name and legend was still whispered around Nazi soldiers, a boogeyman with an assault rifle who had murdered hundreds if not thousands of troopers across the planet and even beyond. William J. Blazcowicz was that man, a former soldier awakened from a deep slumber and thrust back into an impossible war that left him knocking once again on death’s door.

But you can’t keep a good soldier down for long, as Billy’s war was from over, even if his fighting spirit is just as shattered as mortal body. In many ways, Wolfenstein II: The New Colossus is a tale of how Blazcowicz became a legend. Of the backstory that helped shape and define his path forward. It’s brutal, tragic stuff that doesn’t pull any punches in the process as Blazcowicz defies a legacy of pain and facism.

Yet underneath all of that violence, there’s a message of kindness in Wolfenstein II: The New Colossus. Of compassion and courage in an age where mercy is seen as a weakness. Wolfenstein II is an examination of violence begetting violence, of the ends justifying the means and of the spark that a few determined souls can use to light the fire of a revolution. 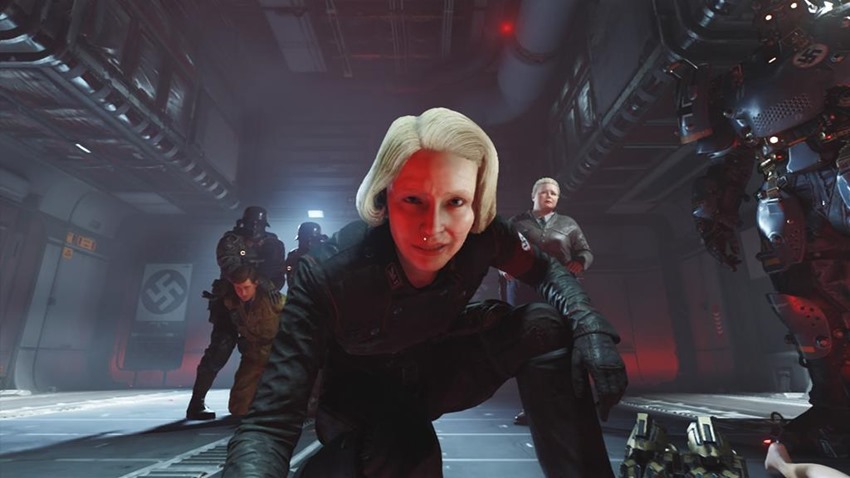 It’s also easily the most bonkers Wolfenstein story ever concocted, that blends the tale of a rebellion with the psychedelia of the groovy sixties and the civil rights march for people of all creeds and colours to be seen as equal. A crusade for freedom, punctuated by moments of insanity and memorable small victories. Sweet Churchill, I think Wolfenstein II might be my single favourite video game story of the year, if not recent memory.

Part of this charm comes from a cast that manages to shine with their distinct personalities. Blazcowicz manages to avoid the usual clichés by being a soft-spoken killing machine whose insight into the world around him creates all new layers of complexity for the protagonist. Blazcowicz could have easily been a jingoistic one-man army, but it’s those quiet moments of introspection that gives him a humanity that you seldom find in other video game heroes. 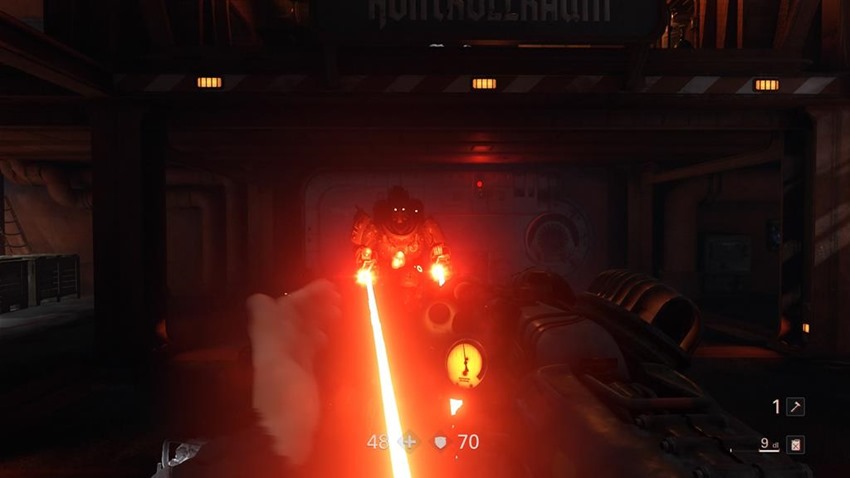 There’s a tenderness to the Texan, a masculinity that doesn’t feel toxic and a dry wit that’s always perfectly timed. It’s that very juxtaposition of personality traits within a man who was born to kill from the moment you guide him into tragically pulling a gun trigger for the first time, that makes Blazcowicz so memorable. He’s not the only face in the Nazi-defying Kreisau Circle of course, but he’s certainly an amazing window into the soul of Wolfenstein II.

It’s not just a cast of renegades and outcasts that helps the world of Wolfenstein II feel so alive, but also its story which manages to do a complete 180 on its tone halfway through its journey. I’ve been wrestling with how to understand this switch, which takes Wolfenstein II from being an examination of making the most of your final hours alive to being a full-on and gleeful murder-train of mayhem and destruction. 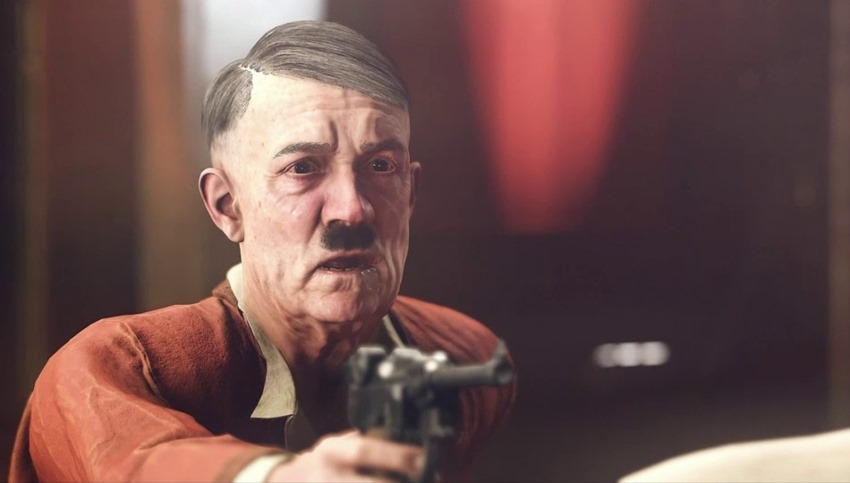 It shouldn’t work. Yet it somehow does, thanks purely to the strength of its cast and the grander themes of doing what’s right that guides the trigger-finger of Blazcowicz. There’s a definite shift at the halfway point, that takes the action to ludicrous new heights as the fight to free America, that is almost tangible. It’s impossibly glorious at this point, as the drive to restore the American dream truly kicks off.

Oh the places you’ll go and the people you’ll maim. Wolfenstein II: The New Colossus doesn’t deviate too much from the formula of The New Order, giving players a chance to handle missions with a degree of stealth or to say “f*** it” and kill everything around them. The very architecture of that system has been fine-tuned, with larger environments and more ways to navigate through them thanks to plot devices that make themselves known later on.

Each arena is a puzzle, a small sandbox waiting to be exploited. The formula itself is simple enough: Take down a commander before more troopers arrive to shred your armour, and do so with as many bullets as possible. On that front, Wolfenstein II is still a prime example of MachineGames being masters of the highest calibre when it comes to firearms, as each weapon has a meaty and kinetic level of feedback attached to the end of its enthusiastic Nazi-killing barrels. 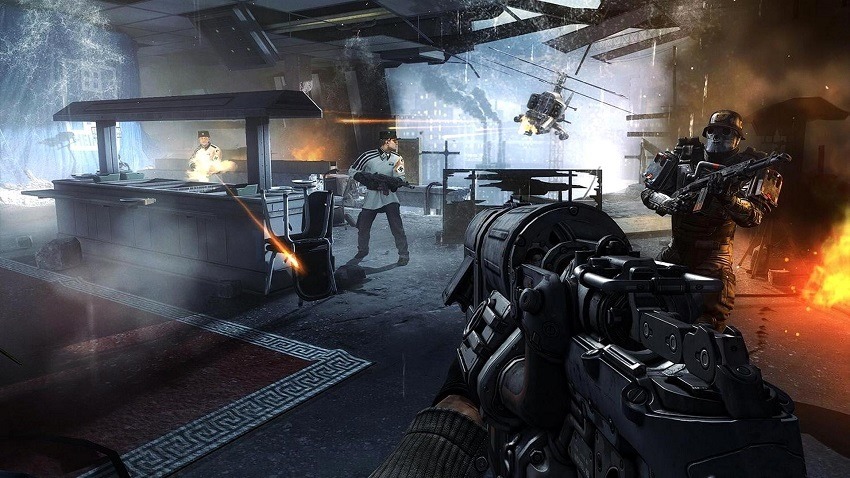 There’s an added twist of the hatchet as well with these familiar weapons, as each gun that Blazcowicz picks up can be augmented with upgrade kits found in the wild. With a trio of upgrades per weapon that drastically changes their form and function, the options that Blazcowicz unlocks helps add variety to the action. The catch here, being that these upgrade kits aren’t exactly plentiful, making each unlock a case of careful consideration.

But in the heat of battle? It’s magnificent. Blazcowicz still has an uncanny talent for doubling up on his firepower and utilising his weapons for pure akimbo anarchy, handy stuff when you’re facing down the mechanical might of the Axis forces in America or even on Venus. Combined with “Contraptions” that gives Blazcowicz the ability to sneak better, climb higher and rugby tackle harder, Wolfenstein II manages to add more to its formula without losing the signature aspects of it what made it have such an impact back in 2014. 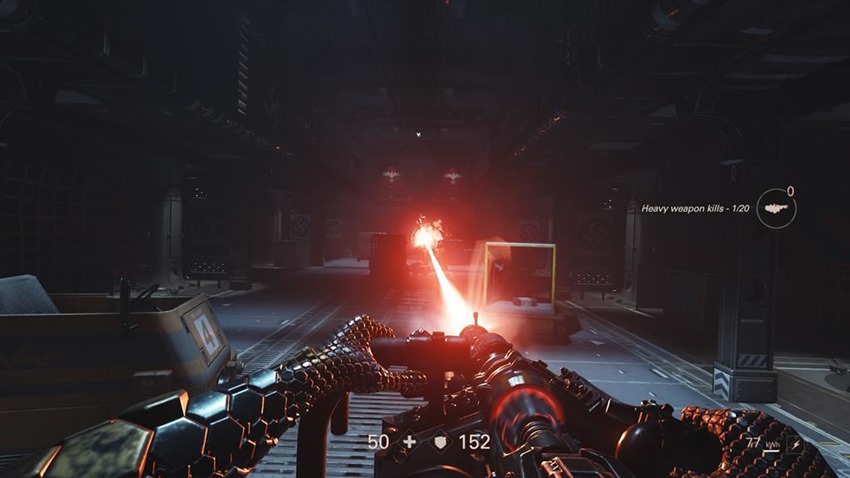 Where Wolfenstein II does fumble, is within more minor gripes. Not every character benefits from current-gen facial rendering techniques, the auto pick-up of armour and health feels temperamental at times and it doesn’t exactly communicate your objectives well enough on the screen. It’s also rather short. My initial playthrough without dallying about to explore clocked in at an easy eight hours for the story alone.

This can be augmented of course with a second playthrough to alter certain decisions, hunting down the highest ranking officers in the Nazi regime across America by deciphering Enigma codes and collecting all other manner of collectible fluff to unlock art and other…stuff. That being said, Wolfenstein II: The New Colossus is satisfying no matter how long or short the time you spend with it.

It’s an escalation of the first game that both encourages and abhors ultra-violence, backed up by a cast who give this sequel an attitude to be proud of.