It’s very rare that I’m enthusiastic about a sequel, especially for a Nintendo title, where there seems to be a new one every week.

Even today, the original Yoshi’s island holds up really well in comparison to many modern platformers. Yoshi’s New Island is an interesting one, because it was developed out of house by Arzest, who have contributed to Nintendo games before, but never a full game. They have a lot to live up to as this series is treasured by many people. 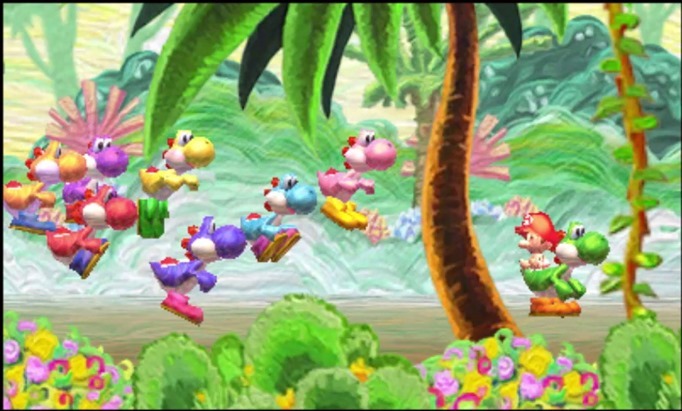 At first, I thought New Island was a remake, and in some ways it is. If you’re thinking they changed up the formula in terms of the core mechanics, you’d be sorely mistaken. It is Yoshi’s Island on the SNES in that respect, to a fault, which like I said, isn’t a bad thing because for a game from 1995, it still holds up tremendously well today. Even things such as the flutter jump and jump height are damn near identical. A weird omission is the dedicated run button, opting for an automatic acceleration to full running speed. 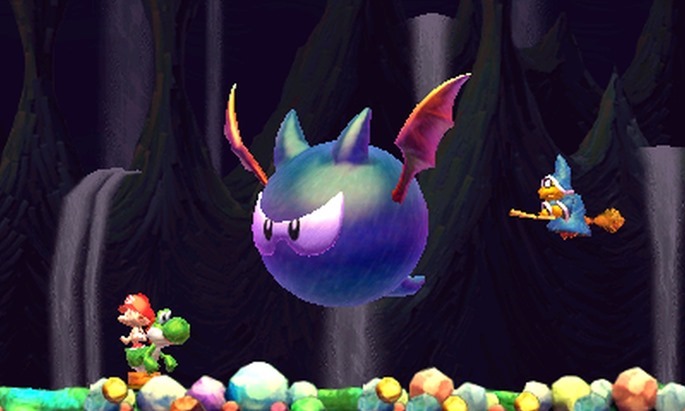 So what’s the story? Well Kamek and Baby Bowser are being jerks again, and you need to rescue baby Luigi and deliver him and baby Mario to their parents. It takes place on a new island called ‘Egg Island’, but I’ll be damned if I couldn’t tell the difference, so nothing has really changed there either. “Gee Stephen, this is certainly sounding a lot like a mediocre remake!”  Ah, but you haven’t asked about the gameplay yet, the most important part. 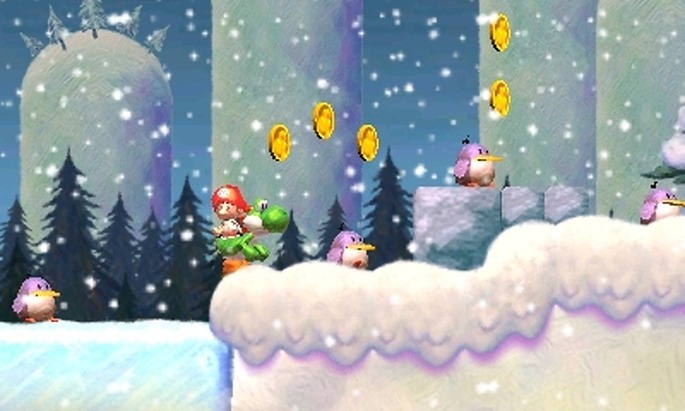 Something that Nintendo games like to do is borrow elements from their own licences, like a collage hoping to make a bigger picture with similar topics. New Island is a cross between Yoshi’s Island, Yoshi Story, and New Super Mario Bros, and it uses elements from all three. There is shell kicking elements from NSMB, enemies and up arrow jump pads from Yoshi Story, and art style and level design from Yoshi’s Island. This all works very well in the New Island engine. 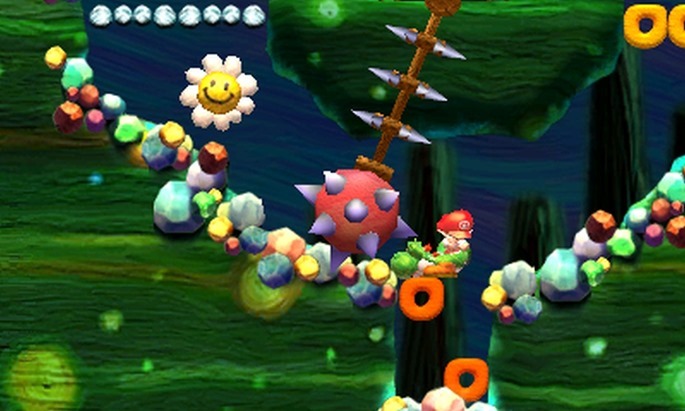 Every level brings forth a new mechanic and a new look. It introduces a new mechanic, which you then use minutes later, especially on the castle levels. The objective is still the same, collect twenty hidden red coins, five flowers, and 30 star bits.

If you get hit, Baby Mario, with his trademark cry, floats away in a bubble, and you need to get to him before the timer counts down, while you’re in a panic that I’m sure is akin to actually taking care of a child and having the pram roll into traffic. The trademark transformations from the old game are still there. Some of them use gyroscope controls,which are serviceable and the developers had the sense to disable 3D during these sequences. 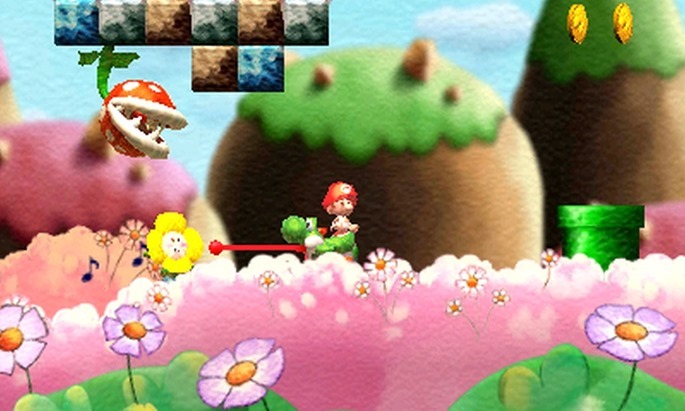 Other than the standard eight levels per world, two boss fights each world, and six worlds in total, there is also a two player mini game mode which you can player using download play with friends. The mini games are unlocked by completing objectives in single player .It’s reminiscent of the download play adversarial multiplayer in NSMB for the DS. It’s good fun, but it’s merely a distraction after the main game is over. If you just ran through the game like I did without trying to collect everything and find every little secret, you’re looking at about nine to twelve hours of play. It would certainly be a lot more if you collected everything, which like the old game is considerably difficult.

This is the first time ever that I’ve ever preferred playing a 3DS game with the 3D on. Without the 3D, the game looks flatter and jaggier than a normal 3DS game. It sort of just blends together into an undefined, albeit colourful mess. Turn on the 3D, however, and this is a fantastic looking game. It mimics the drawn art style of the original, and the 3D emulates the wonders of Mode 7 very well. 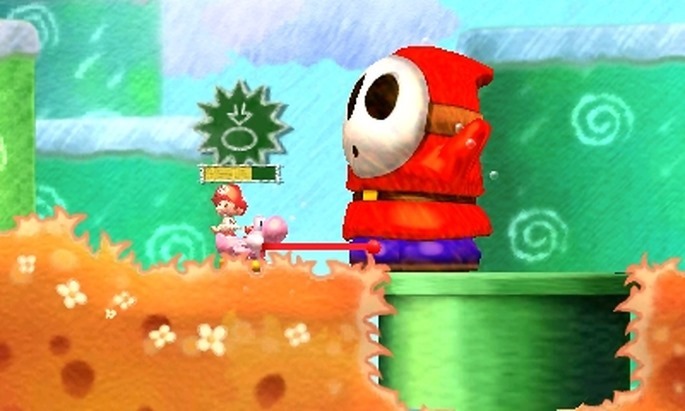 I think that’s what makes it work too, in that they use the 3D to simply deepen the background and slightly bring the foreground closer. So set your 3D to where it’s comfortable, and you’ll have a great time just looking at it. The frame rate won’t chug either, which is always a plus. Don’t let these static images fool you, this is a beautiful game with a fresh look, while still resembling the source material. 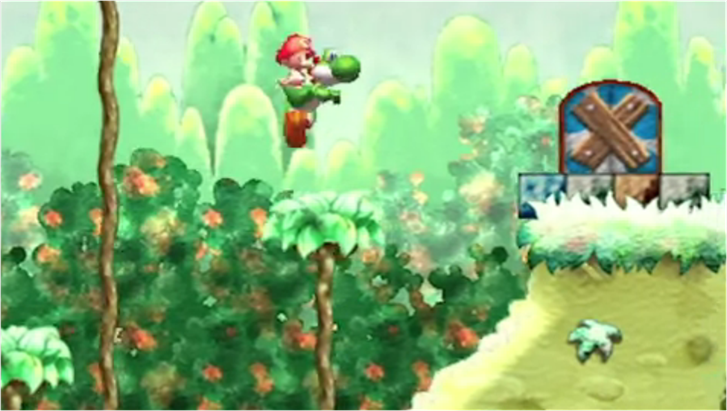 The music is not what I expected. It reminds me of Kirby’s Epic Yarn, really beautiful, but different to the usual catchy melodies. Expect a lot of not-exactly-memorable but nice, ambient pieces in New Island using traditional instruments. They’ve slowed the beats per minute to make the songs more relaxing and chill .There are some liberties taken where they remix old tunes, most notably during the intro cinematic, which nearly brought me to tears. The good kind of tears; rose-tinted nostalgia tears.

I really wish this would’ve been released on the Wii U alongside Yarn Yoshi, which is apparently going to be Yoshi Story but with a fluffier texture. It’s totally serviceable on the 3DS, but I’d have liked the chance to play it with the Wii U hardware, which would have looked incredible. There’s nothing here (save the 3D) that couldn’t have been done better on the 3DS’ bigger brother.