Home Tabletop Exploding Kittens sounds amazing and you need it 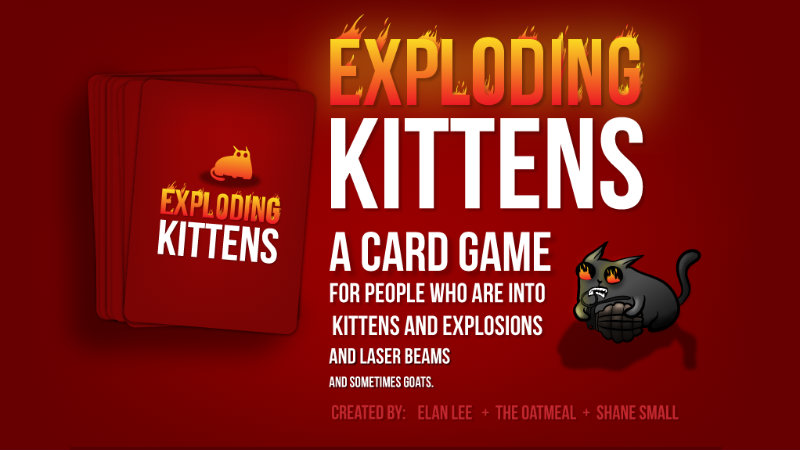 I am a huge fan of The Oatmeal. His comics are hilarious and brilliant. Whenever people ask me about my job, I like to send them this one and when I was editing words instead of Geoff, I believe I sent this to Sandy almost every day. Now he’s helping to make a game, and I need it in my life.

Exploding Kittens is “a highly strategic kitty-powered version of Russian Roulette”. You take turns drawing cards and if you draw a kitten card, you explode and die and you’re out of the game. However, there a whole bunch of cards to defuse the cats, including laser pointers and catnip sandwiches. Plus, you can play other cards to skip your turn, attack other players or move the kitten cards around. I think Inman explains it best in the pitch video:

The game mechanics were designed and created by Elan Lee and Shane Small with the art and write ups done by The Oatmeal. Obviously, I’m not the only one excited for this game – it hit the goal of $10k in record time. At the time of writing, it has almost hit $1.5 million, and it’s still in the first day of listing. I’m just waiting for payday and then I’ll be picking up the version that includes an NSFW deck because I need to see how they can make this game go from a 7+ age range to a 30+ age indication. I would have gone for the Collector’s Deck, but it’s already sold out. I challenge you all to a game of Exploding Kittens… in July when they’re expected to ship.