Wreck-It Ralph built a world firmly entrenched in nostalgia. In addition to the heart of the story and the fantastic characters that it introduced, a lot of the enjoyment in the 2012 original came from spotting characters and references to the old arcade games of yesteryear. Much the same can be said about this year’s sequel, Ralph Breaks the Internet, but this time nostalgia takes on a different flavour. 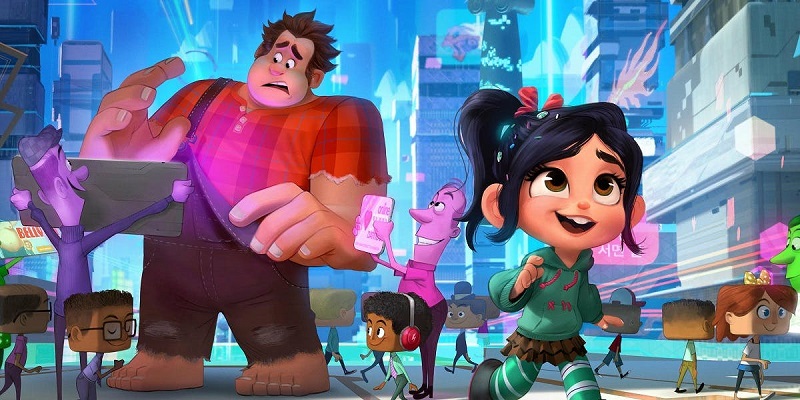 In the six years since Wreck-It Ralph (John C. Reilly) and Vanellope von Schweetz (Sarah Silverman) fixed Vanellope’s game, Sugar Rush, life has been good for the characters in Litwak’s Family Fun Center & Arcade. Ralph has found contentment with his lot in life as the villain of his game and Vanellope is a popular and well-loved character by those that play Sugar Rush. Days of work in the arcade drift by in a contented routine, while nights are spent hanging out in the other games. That is until a new “game” is plugged into the arcade’s power strip… The Internet. And you can be sure it’s off-limits to the denizens of the arcade. 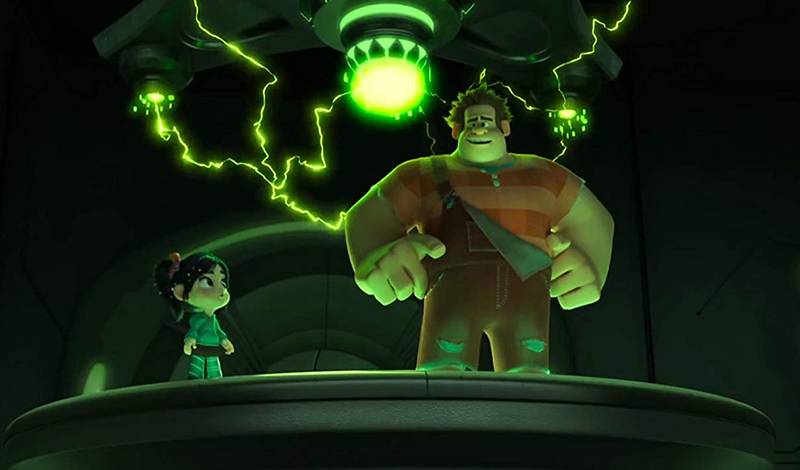 While Ralph might be content with the monotony, ever-moving Vanellope is starting to get antsy doing the same thing over and over. In a well-meaning, yet misguided attempt to make his best friend happy, Ralph attempts to spice up her game and, in doing so, sets off a chain of events that has our heroes jetting off to the big, scary, brand-new (to them) World Wide Web.

During Ralph and Vanellope’s (mis)adventure, a slew of new characters are introduced. There’s KnowsMore (the voiceover chameleon Alan Tudyk), a small search engine with an aggressive auto-fill, Shank (the always incredible and infinitely likeable Gal Gadot), a savvy road racer from the online game Slaughter Race, and the algorithm known as Yesss (sassiness personified by Taraji P. Henson), responsible for making or breaking the virality of online videos.

Alongside the new characters, Disney has thrown all their property into Ralph Breaks the Internet. There are cameos from Star Wars characters, Marvel characters and, in my favourite scenes of the film, every Disney Princess ever, who participate in regular “Which Disney Princess is your Best Friend” online quizzes. Though, oddly enough, most of the proprietary characters from Wreck-It Ralph are sadly neglected, like Fix-It Felix (Jack McBrayer) and Sergeant Calhoun (Jane Lynch), who are completely sidelined. 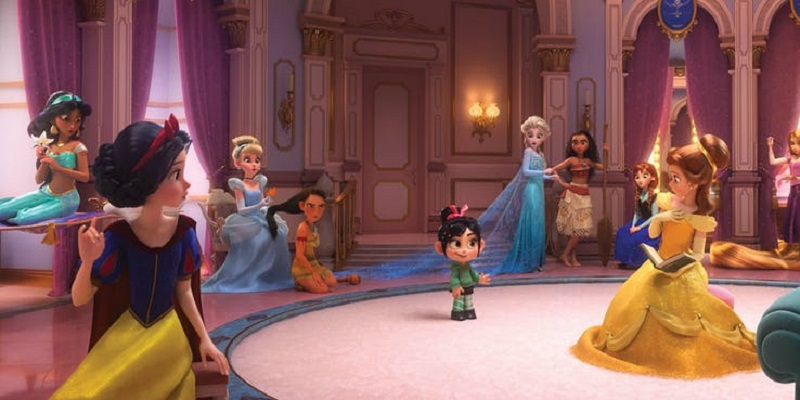 Through the eyes of our heroes, the anthropomorphic aspects of the internet are new and wondrous, and the clever visual gags come thick and fast. In addition to Ralph and Vanellope’s personal stories of development, there is some general satire about the internet overall – and one specific scene about the comments sections that is sadly funny in how true it is. Unfortunately, these witty observations and visual gags might be Ralph Breaks the Internet’s downfall. 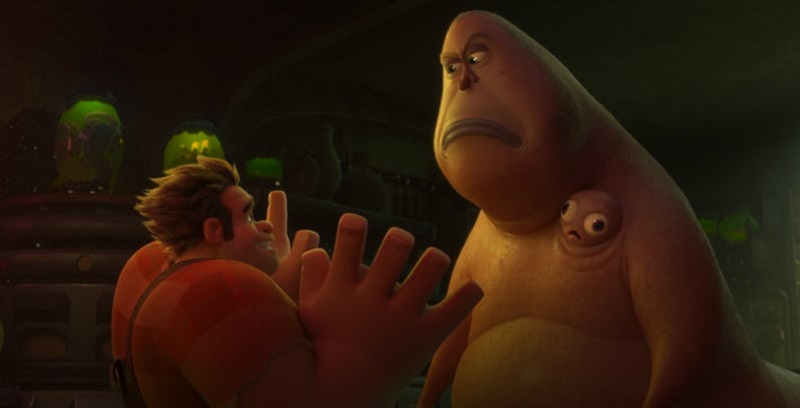 Though it feels so incredibly wrong to compare something from Disney to something as absolutely awful as The Emoji Movie (shudder), it has to be noted that this road has been travelled before. Ralph Breaks the Internet is infinitely better than the film I just mentioned (don’t make me say it again, it makes me feel gross), but an anthropomorphic internet is not a new concept, and it stings that Disney was beaten to the punch by a far lesser movie. So, already, Ralph Breaks the Internet is on the back foot, and loses so much of its original magic.

With something as fast-paced and ever-changing as the internet, there’s no stable base to build a story on. It seems to me that this time, as clever and entertaining as it is, the Wreck-It Ralph world has been built on sand dunes. Who knows what kind of shape they will take in the next six years? Like the majority of the internet, there’s not a lot of staying power. Within the first few minutes of Ralph’s attempts to go viral on “Buzztube”, the references feel dated. Though, I suppose, through the wide-eyed innocence of Vanellope and Ralph, it’s all new and fresh. 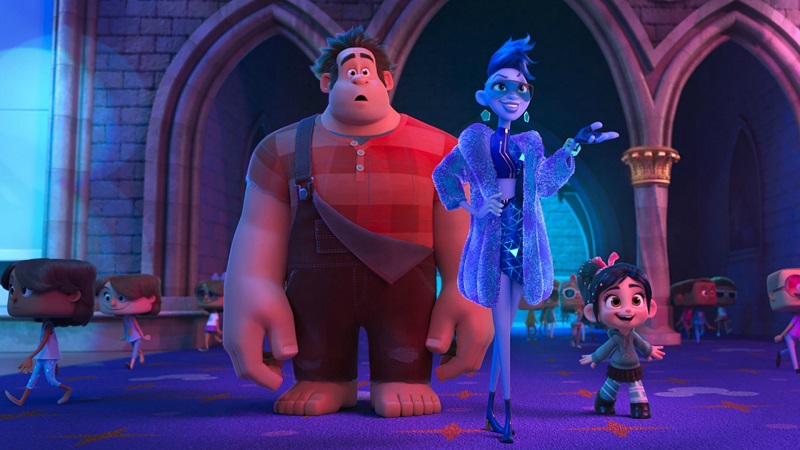 In taking on that perspective, Ralph Breaks the Internet is a glossy, sanitised look at the internet, far removed from the situation as it currently stands. That nostalgia I mentioned at the beginning? It’s a nostalgia for the time when the internet itself was young and innocent. There are attempts here and there at some cutting jabs, but even the representation of the seedy underbelly of the dark web is oddly sterilised, and corporate domination is treated as completely harmless.

Parents should be warned though, there are some rather scary moments in the film’s climax, and little ones might be overwhelmed. Maybe even parents, depending on how sensitive you are. I’m only mentioning it because, honestly, I was freaked out. 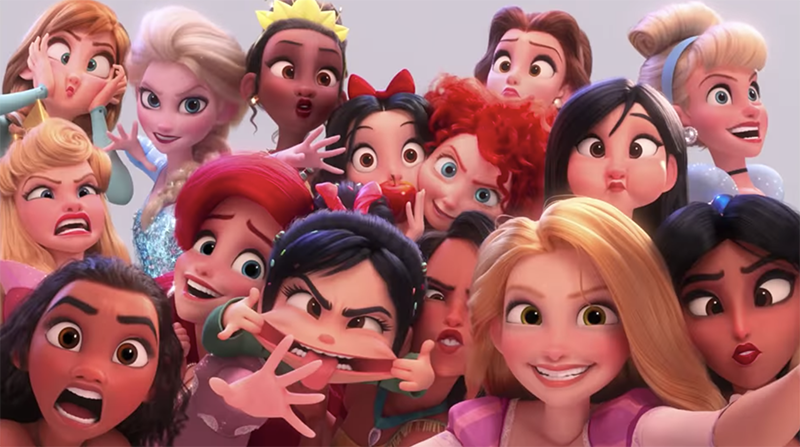 At the end of the day, Ralph Breaks the Internet is a Disney film, through and through. It has a lot of heart, a lot of charm and a lot of jokes, and there is the usual, sweet message about friendship and growing up. Despite everything, it is great to see Ralph and Vanellope on screen again. It’s just a pity that their story was not as strong.