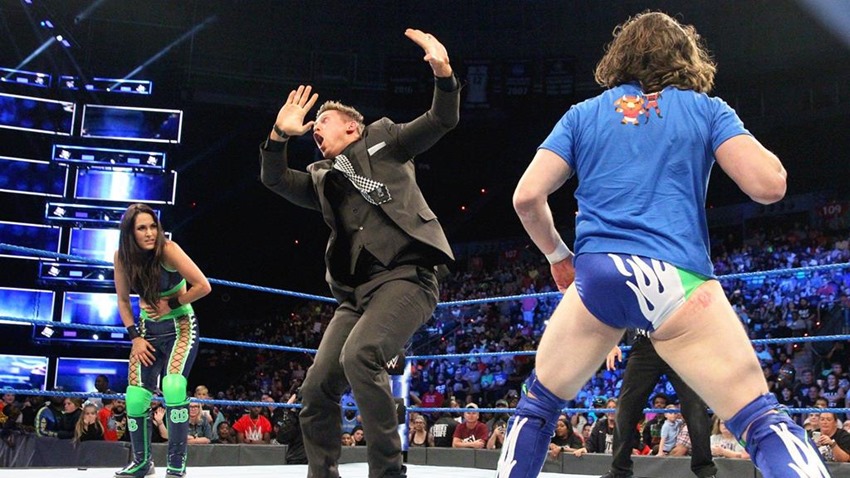 WWE Smackdown LIVE took place from the Cajundome in Lafayette, Louisiana. Here’s all the action that went down ahead of this Sunday’s Hell In A Cell event.

In a taste of things to come at Hell In A Cell, Jeff Hardy’s vcious match against United States Champion Shinsuke Nakamura was quickly derailed when Randy Orton arrived to deliver some punishing steel chair shots. Battered but not broken, Hardy weathered a storm of pain and returned the favour to Orton, nailing the Viper with a chair, a Twist of Fate and a Swanton Bomb that sent his opponent packing.

Smackdown’s queen may have edged a victory out against Sonya Deville last night, but her celebration was cut short when her walk back up the ramp saw a mystery fan get the jump on her. That fan in question? None other than Becky Lynch, whose brutal assault ended with a Dis-Arm-her on the reigning champ.

Rusev Day def. The Bar to earn the right to challenge for the SmackDown Tag Team Titles at WWE Hell in a Cell

Only one tag team will face The New Day at Hell In A Cell this Sunday, and after a hellacious journey that team is Rusev Day. Rusev and Aiden English managed to prevail over Cesaro and Sheamus, as the Celtic Warrior felt te full brunt of a Machka Kick that put him down for the count.

Truth and Almas put on a great show last night, but El Idolo got the sneaky win with a handful of Truth’s tights that the ref never saw. A sign of things to come in the Mixed Match Challenge? Probably.

Enh. Brie Bella fought Maryse in an average match, that ended when The Miz grabbed Brie’s leg and broke up a YES! Lock. Disqualified, Brie got the better of Maryse in a brawl while Daniel Bryan cornered The Miz and went to town on him. And that was the show for the night!