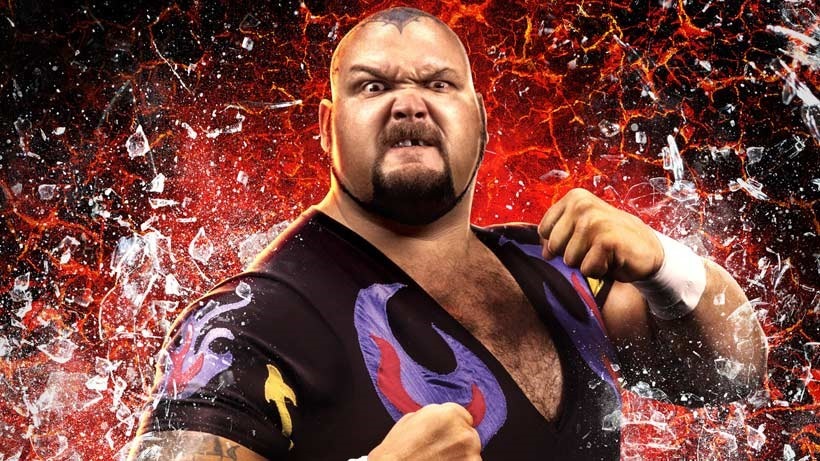 Summerslam is over, and its wake it left the greatest gift possible: A new GIF of the Undertaker howling like a beast next to BUUUUURROOOOCKKKK LEEEESNAR, who could only chuckle at the magnificent spectacle that is sports entertainment.

Adding to that spectacle, is the usual rush of merchandising. T-shirts, replica championship belts and of course, video games.

WWE 2K16 hits soon, with a massive roster of colliding flesh-muscle mountains, that’ll be all up in your face with pterodactyl shrieks that will send you flying into Suplex City. Here’s the latest roster reveal, which includes that one fella who likes to remind you about who he is and how much he enjoys fighting:

And with those names, the usual character posters, in case you want to gaze at Bam Bam Bigelow’s head-tattoo, which still baffles me to this day:

While the additions of Randy Orton and The Big Show are a given, I always dig seeing which WWE Legends get added to the game. Those are the performers who got me hooked on wrasslin’ in the first place, huge piles of muscles with charisma and fantastic mic skills.

Unless Scott Steiner was in the ring, in which case you’d be entertained by some ridiculous ranting while you waited for his biceps to explode after an ill-fated elbow-drop.

It’s a solid roster reveal this week, which now brings the WWE 2K16 locker room up to 56 confirmed entertainers. The game is out October 27 on PlayStation and Xbox consoles.