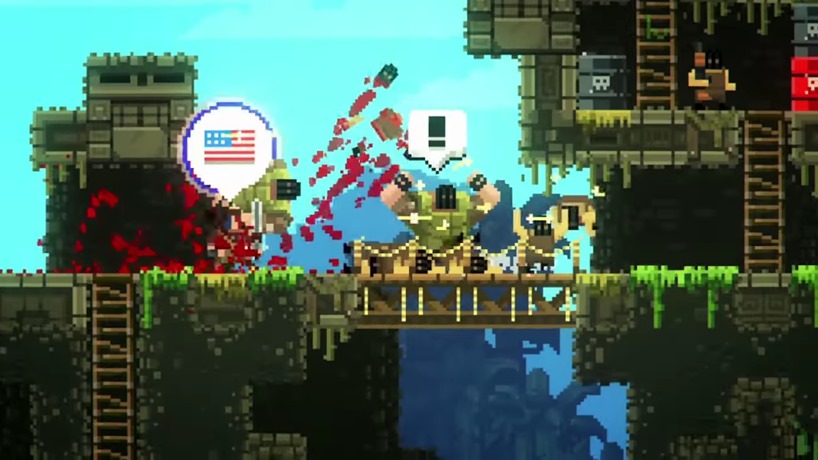 For a game normally inundated with explosive weaponry, explosive periphery and, well, just explosion in general, the BroForce Independence Day Update (because of course there’s one) is all about getting up close and personal with you friends and foes. That’s if you ignore at least one of the two new Bros on offer – who basically has explosive abilities baked right into his name.

Every now and then my knowledge of classic action movies fails to keep up with the extensive knowledge of the guys over at Free Lives, and Brocketeer is a perfect example of that. The jet-pack wearing Nazi killer brings his signature brand of high velocity explosion smashes to the less particular terrorist filled lands of freedom hunting, and looks like he could very well be a new favourite of mine. If only Broheart didn’t look so much like Conan with a massive throwing sword to dispense out justice, that is.

Most of BroForce’s melee characters (used in the most loose sense possible) are actually some of the most satisfying to use, but the Freedom Update intensifies things for everyone when getting within spitting distance of balaclava-clad freedom killers. You can now slice, dice, juggle and launch yourself off enemies with new, character specific melee attacks – which all look for more fun to pull off than the generic knife swipe they replace. Hell, I might actually stay my trigger finger in a bid to see how many enemies I can chainsaw through in a level as Ash Brolliams.

Speaking of guns though, what’s the point of duking it out as some of the toughest men and women of the action film industry and not be able to show it off. The Freedom Update now adds 1000 times more muscle flexing, letting you shed the sleeves and rock those guns out while the sun’s out for all your friends to see. Just ignore the world-threatening mayhem around you – that perfect bicep flex is far more important.

The most patriotic update you’ll download this month is out now, and BroForce itself is a cool 33% until Monday in case you haven’t yet tasted the sweet nectar of Bro and Machine. There is still, however, no release date to be found.