Home Gaming Call of Duty: Black Ops 3 – how well does it perform? 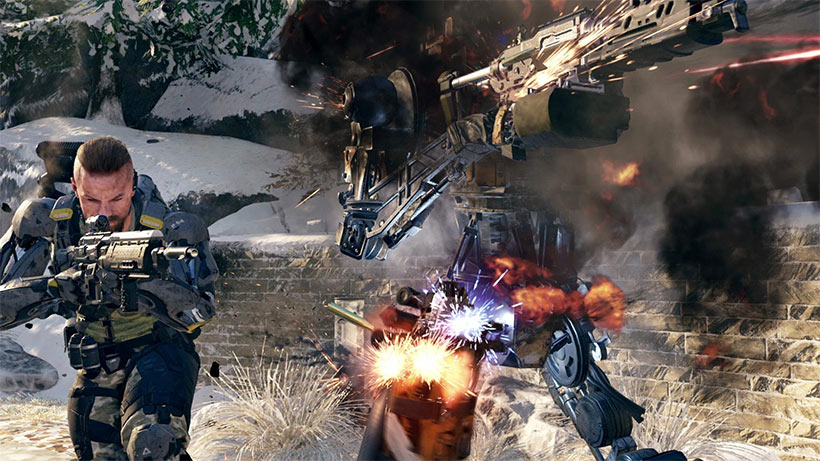 I didn’t get to play the Call of Duty: Black Ops 3 beta this past weekend, mostly because I was too busy turning foes in to mincemeat in Gears of War: Ultimate Edition – one of the few multiplayer games where I’m not stuck in a perpetual death/respawn loop. Perhaps you did get to play in the beta – but if you didn’t you should probably know that you’re likely in for a treat if you’re a Call of Duty Fan.

Eurogamer’s Digital Foundry has pulled the beta apart as they’re often wont to do, and have come away impressed with the test. While it’s not the best-looking game on the PlayStation 4, and is lacking Anisotropic filtering (once again!), it mostly sticks to that sweet 60fps threshold, delivering a buttery smooth multiplayer experience – made even better by the fact that its running on a local dedicated server (which, presumably, was also being tested, and had limited slots – so if you didn’t connect to a server, you likely connected to a Peer host).

Here’s what DF had to say though:

In terms of performance, the Black Ops 3 beta delivers a mostly solid 60fps experience in multiplayer – albeit with visible drops in frame-rate during more bombastic segments of gameplay with lows of around 55fps manifesting on rare occasions. Controls are otherwise crisp and consistent for gameplay, and outside of an occasional moment of judder, these drops in performance often go by unnoticed.

The only noticeable drops come about in rare, heated moments, where exploding grenades and airstrikes combine to see metrics fall to around 50fps. This only happens in short bursts around smoke and particle effects, and in line with what we see in Advanced Warfare, the engine quickly recovers to a steady 60fps. Across a general run of play though, the most noticeable variances in performance appear directly after respawning outside a firefight, or when the camera transitions from gameplay to the kill-cam. In this case, the engine appears to temporarily freeze as it streams in data from the enemy’s viewpoint, causing a tiny pause – but obviously, this doesn’t affect gameplay.

So far, despite some variances in overall smoothness, frame-rates and controller response feel both fast and fluid. The performance issues surrounding Ghosts in multiplayer appear long gone, and the overall impression is that COD fans are well served by a refined gameplay experience paired with a pretty solid level of performance. Mild dips in frame-rate aside, the impact on gameplay should largely go unnoticed for all but the most hardcore of Call of Duty players.

I absolutely abhorred Call of Duty: Ghosts, and I gave Advanced Warfare a skip too. Treyarch’s games have always been more up my alley, and I love what they’re doing with the game’s movement, so I’m a little more on board this time.

Did you play in the beta? How was your experience? Has it convinced you to get Black Ops 3, or has it got you convinced that it’s all just offering the same thing again? Here’s a look at a recent Call of Duty: Black Ops 3 beta weekend hosted by the chaps at Megarom (Thanks to Victor Moolman for the vid).