I WAS incredibly excited when I found out that I would be the new Lazygamer intern. Little did I know that I would be forced to do all sorts of horrible things daily. I really thought the community would have my back. How could they not support the newcomer… the underdog? How wrong I was.

A few comments and hashtags later, and before I know it, I have a copy of Kim Kardashian Hollywood on my phone for review. So here you are friends, your demands requests are my command! Lets kick things off with some character design. I had big dreams for my avatar, so I named him Swag Machine! Who could resist this good looking chap with a wannabe afro? Problem is, a cool name and big hair won’t get you far. You start off as a Mr/Miss nobody, with 0 recognition from anybody. 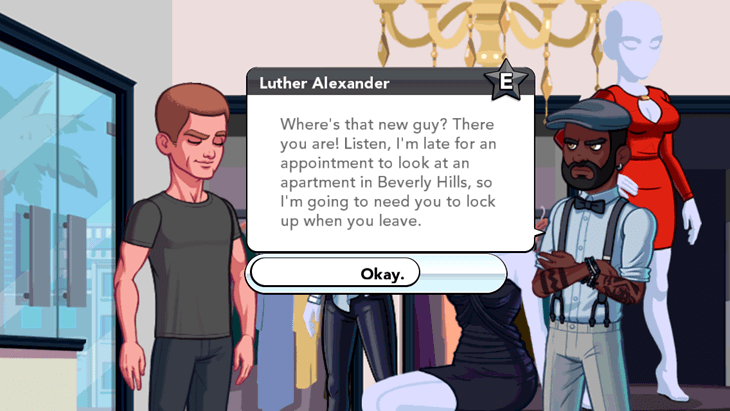 It isn’t long before fame finds you though, as you are soon spotted by Kim Kardashian. Oh, how nice of her, she is going to go out of her way to make me a star! Before I know it, I’m ranked as an E-list celeb. I’m now well on my way to stardom. Kim hooked me up with an agent, Simon. Quite an enthusiastic bloke really, he has a near endless supply of small time work for me to do. My first gig was a photo shoot. Till this point, there had been no real gameplay. That all changed when I was posing in front of that camera.

Each job has a five star rating bar and time limit before completion. To fill that bar, I had to do all sorts of things; change my outfit, smile for the camera, react to the backdrop… you get the idea. Doing any of those requires a few thumb taps and costs energy which regenerates in small amounts every couple of minutes. 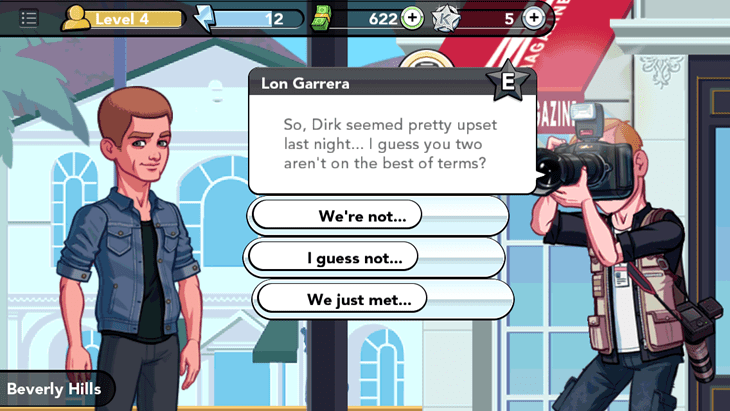 The small jobs aren’t too bad, you can achieve the 5 star rating with ease. The problems start when you start getting the longer jobs. They take a good few hours in real life, and a lot more effort to fill up your ratings. Much like any other free to play game, it’s at this point where people stumble and become impatient. You can spend real money on Kardashian tokens, which you can then spend on extra energy. The credit card swipes won’t end there. You can choose to buy clothes and other extra accessories with money earned from your gigs. Is that taking just a teeny bit too long? You can spend real cash for in-game dollars.

I played the game for around two weeks, slogging through the free to play path. I managed to save up around $1500 (with minor spending here and there), and that is a petty amount. Oh, I have a quest to buy that snazzy new condo? Too bad it costs $2000. Let the small time gigs continue! 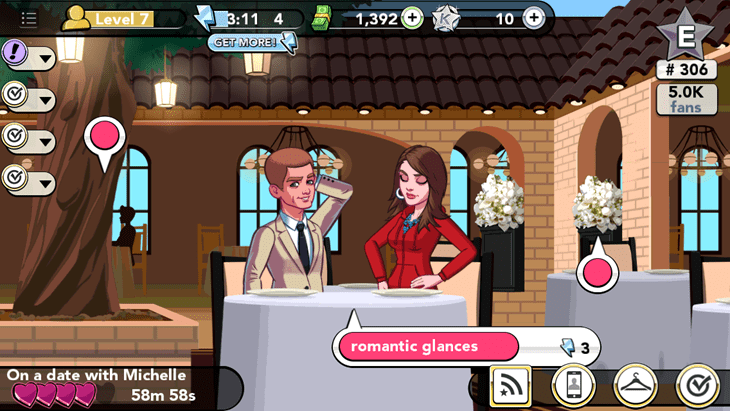 To ease my transition into fame, Kim organised a date with her friend Michelle Murphy, a pretty writer. Things seem to be going well, but Michelle keeps commenting on my poor date attire. She’s crazy, does she think I’m going to spend $1750 on that really nice jacket? Maybe I can buy these $2250 shoes for her to show her how legit and serious I am about our relationship. Oh wait, no I can’t, because I’m poor as piss.

This relationship clearly won’t last, I should break up with her before she dumps me! I’m having a really tough time, but at least my birthday is coming up. It looks like Kim wants to throw me a party all the way in Vegas! Seems a bit excessive, but hey this is the celeb life and before I know it, I’m on the next plane. I scoped out a potential venue, but the owner was a bit of a snob, denying the use of his club because I’m not well known. I’ll show him, Simon surely has more work for me which will bring in the fans! 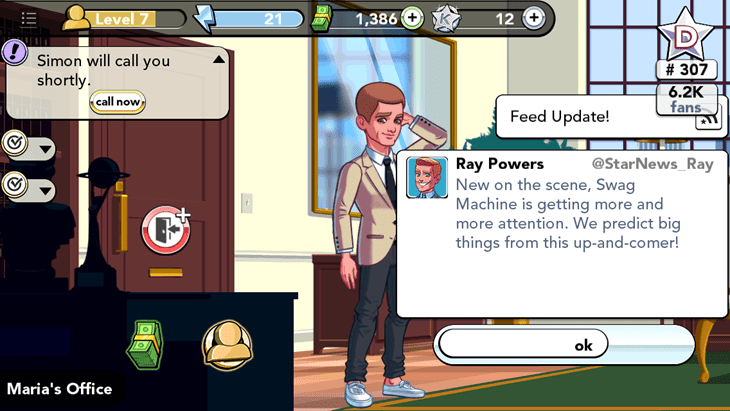 It took several days before I was finally famous enough to warrant the use of Mister Snob’s club. Heck, I’m making quite the name for myself, I have nearly 10 000 fans! Oh, Kim got me a snazzy new jacket for the gig… she’s the best, so kind and generous! I suit up and head over to what will be one of the most memorable nights in existence. Sure it’s my birthday, but Simon tells me the party really is more of a publicity stunt.

Time to score me some more fans! It’s going to last a whopping 8 hours, time to mingle and get to know everybody. Urgh, I’ve squandered my energy. I refuse to pull out my card, so I guess I’ll just have to wait before I can continue socialising. I forget all about the party and pocket my phone. A few hours later I get a notification telling me it’s nearly done. OH NO! I forgot all about my guests! My star rating for the party is terrible, 1 out of 5 to be exact. It’s clearly going to be ranked as a failure. That’s still not too bad, right? I mean, where would I find the time to check my phone that often to ensure a good rating? I probably just won’t gain as many fans as I normally would. A few hours pass and the review comes in. I check it nervously, knowing I screwed up pretty badly. The party was reported to be a mess. I lose a whopping 2000 fans, I’m down to 8000 once more.

I’m over it, I worked so hard to get those followers. I did so many small time spreads and gigs! Simon calls with more work, not offering a single comment on the events of the night before. He must be really angry! Hey, it’s something money can fix, right? Yeah, it was at that point that I stopped playing and stopped caring. I am clearly not the target market for this game. I can understand why it is popular though, because it gives people the opportunity to live out their dreams of becoming a celebrity. That however, is something that doesn’t appeal to me at all. From a completely objective gameplay point of view, it really is nothing to write home about.

What I can compliment is the actual game design. If you’ve ever played something like The Simpsons Tapped Out for example, you’d know that the loading screen is an absolute pain. The Kim Kardashian game loads in and out in a couple of seconds, meaning that checking on your upcoming celebrity isn’t an absolute pain in the ass.

Other than that, it isn’t a game I could really recommend, at least not to a hardcore gamer. It can be mindlessly addictive to be honest. I have this annoying feeling that I should be looking at my phone, spending energy and collecting money and fans, but then I remember that I have better things to do.