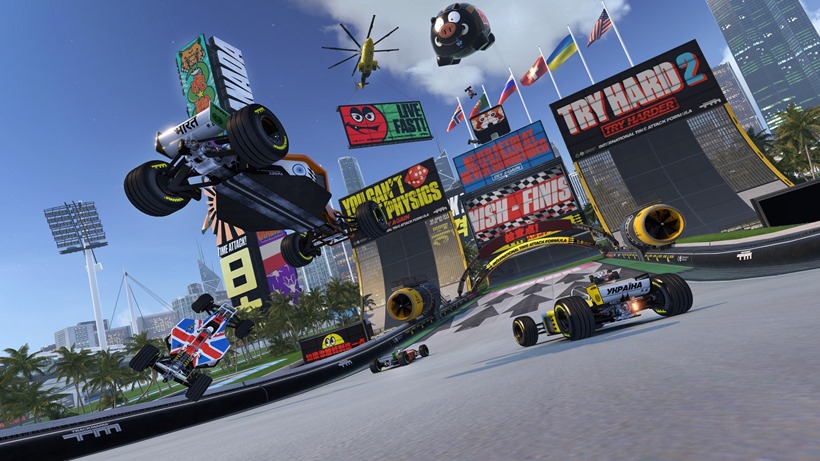 If you’ve ever found yourself looking for a high speed racing fix, but felt that Boksburg was just too far a drive, look no further than the Trackmania franchise. Nadeo’s VROOM VROOM games are all about mastering intense velocity, getting optimal racing lines, and of course, navigating each crazy course (loop de loops and wall driving included) with perfect precision. The newest title, Trackmania Turbo is no different – it looks like it’s going to keep that addictive arcade racing formula intact.

Ubisoft have released some new gameplay footage for their upcoming racer, and it’s looking rather good. Check it out (via Polygon):

Trackmania offers you the ultimate arcade racing universe where everything is about reaching the perfect racing time. Race through two environments and take a look at the Double Driver feature in action in this walkthrough commented by Tommy François and François Alaux, Creative Director on Trackmania Turbo.

If you’re a fan of the franchise, you’re no doubt looking forward to Trackmania Turbo. It has everything previous titles have had, but adds some extra polish and throws in a few extra features in for good measure.

Double Driver for example, is a new a co-op addition which lets two people drive the same car. Yes, you read that correctly… the same car. I feel it could be equal parts frustrating and fun. Either way, it’s a neat new feature that I would love to try out myself so I could intentionally make my driving buddy fail again and again. That’s what good friends are for, right?

Another cool feature is the ability to generate completely random tracks. This will come in handy once the game’s default 200 have been perfected – something which won’t happen overnight – I guarantee it. Tracks always start out easy enough, but soon progress to nightmare mode, requiring dozens, if not hundreds of restarts to really get the hang of.

Lastly, Trackmania has traditionally been a PC exclusive (there hasn’t been one on console for years). This is not the case with Turbo – it will be coming to both Playstation 4 and Xbox One too.

Interested? You can get your hands on it sometime in November.