Red Dead Redemption 2 is a story about change. Sure, other themes are swirling around its narrative stew, but change and the refusal to adapt to change are at its core. It’s the central conflict of the characters. Dutch Van Der Linde, leader of the gang of outlaws, goes to extreme lengths to escape the rampant wave of “progress” that is exterminating his way of life; The growth of civilisation encroaching on what was once a “free” land in which people could do what they wanted without bureaucratic repercussions. For the most part, the story succeeds. RDR 2 is a fantastic tragedy of characters so stuck in their ways that they refuse to accept that things have and are changing, being so rigid in their ideals that they can’t see past the harm they’re doing to themselves and others. 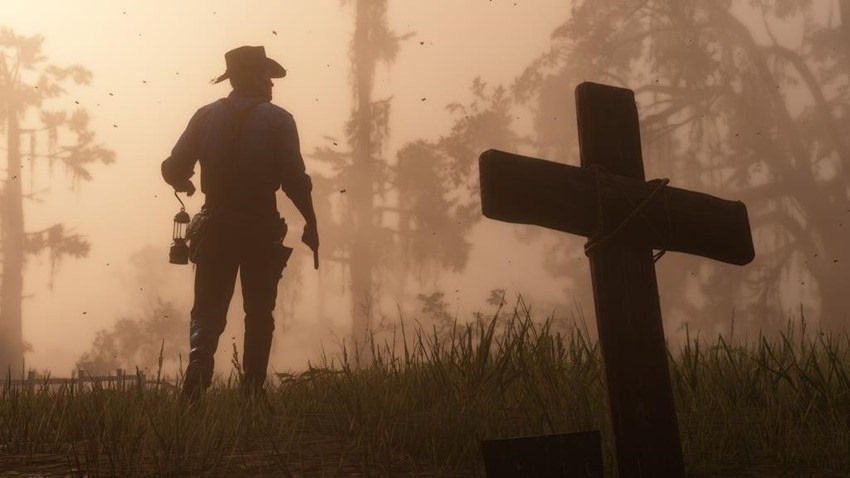 Which is super weird because Red Dead Redemption 2 is also a game that is so super dated and stuck in the past that it hurts the overall experience and leaves me with a strong sense of dramatic irony.

Plenty has already been said on RDR 2’s gameplay. Many have lamented the tedium and slow pace the game insists on for the sake of realism as well as the inclusion of many features that have long since adapted and grown more streamlined over the years. As Mark Brown of Game Maker’s Tool Kit puts it: “A lot has happened in open world games in the last eight years, since the release of Red Dead Redemption 1.”

Harshly restrictive mission structures, cumbersome menu navigation, stagnant combat and an open world that lacks an unscripted systemic spontaneity are all problems that hold back RDR 2 from being ‘the best open world experience’. 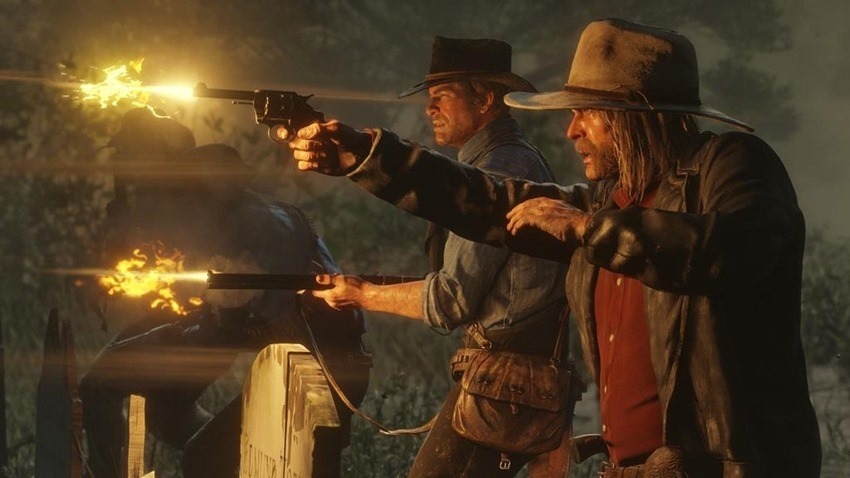 Being presented with an open world as impressive as RDR 2’s is truly magical. The vistas, the towns, the people; they all lead to an experience that is, quite simply, magical. But this is only true for the first few hours. Once you spend enough time in New Hanover and West Elizabeth, you begin to realise that other open world games have just…done it better? The interactive ecosystem and food chains of Far Cry vastly surpasses the admittedly impressive number of random encounters in RDR 2. The open-ended nature of quests in games like Fallout: New Vegas or The Legend of Zelda: Breath of the Wild that allow for player expression and unique experiences offer far more than heavily scripted missions in which the player is punished for being creative or thinking outside of the box. These are problems that have been solved by other games.

The thing is, these are issues found in nearly every other Rockstar open world game. Grand Theft Auto V suffered from similarly restrictive mission structure and cover-based combat that feels clunky and unsatisfying. Sure, improvements have been made to their formula, but many of these problems are still rampant within the game. It’s baffling to see these same problems still exist in Rockstar’s open world games in 2018. It’s been five years since the release of GTA V, and in some ways, it feels like RDR 2 has learnt nothing from its older sibling. It’s as if Rockstar is so set in their ways and so focused on the formula that put their studio on the map that they can’t bear the thought of evolvi…ahhhhhh, see what I did there? 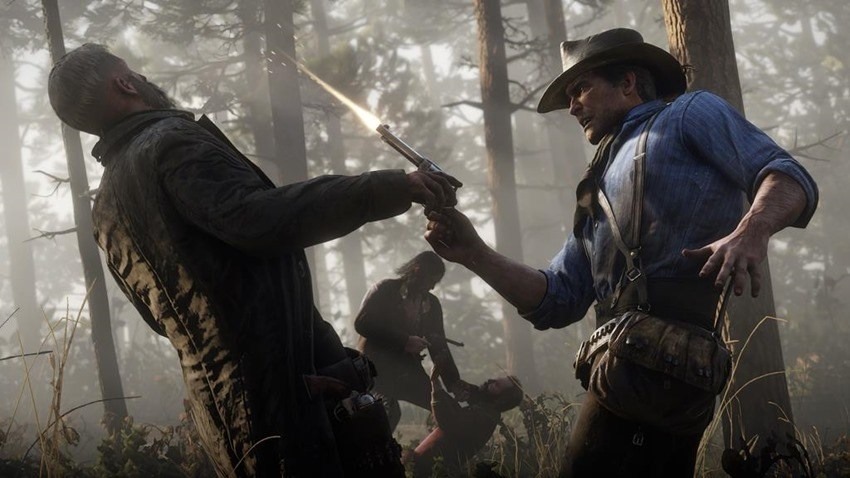 Ludonarrative dissonance is one of those phrases some guy on YouTube who critiques video games for his Patreon throws around to sound super clever and important, and if you’ll forgive me for two paragraphs, I’m about to do the same. Ludonarrative dissonance is a clever-sounding way of saying that a game’s mechanics, its gameplay, contradicts the narrative it’s telling. This can often be seen in game’s where the player is presented with a desperate and vital quest of the utmost importance but then spends the next four days finding scrap to build a water purifier in some meaningless farm in the middle of nowhere (Fallout 4 was wild). Now, ludonarrative dissonance isn’t the core problem with RDR 2 (although it certainly rears its greasy, bespeckled head to hunt pheasants for days in the middle of an impending outlaw exodus). It’s not a case of the game’s mechanics undermining the main narrative, but rather being entirely oblivious to the meaning behind the story. A sort of ‘Ludonarrative Irony’, if you will.

For our cases, I would like to define “Ludonarrative Irony” as when a game’s mechanics don’t necessarily invalidate the game’s narrative but rather miss the point of it. It’s like the story is trying to convey a specific message, one that could be applied to the game itself, but is glossed over entirely, almost as if the game is unaware of the point it’s trying to make. It’s like if in the Fallout franchise war suddenly changed. It doesn’t fundamentally break the story. The structures and conflicts are still present, the gameplay is just oblivious to the themes put forward. 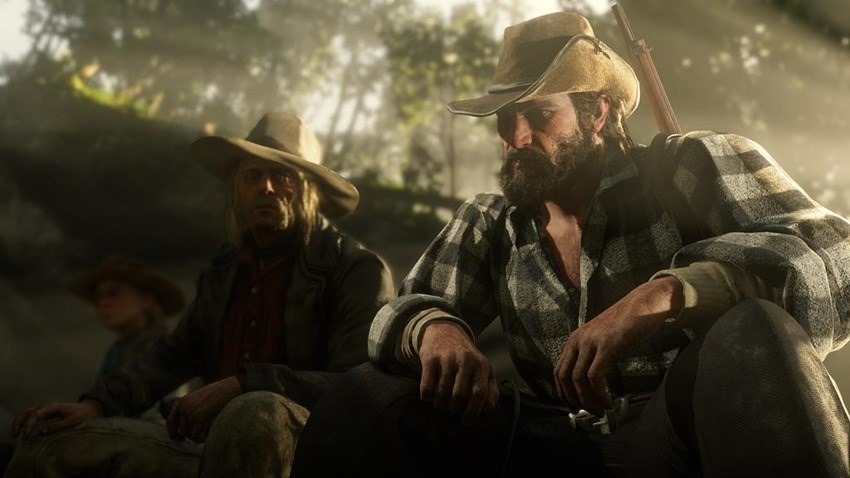 RDR 2 is dripping with ludonarrative irony. The story, a tale about the dangers of denying change and clinging onto a vision that has become less acceptable as society has grown and developed becomes increasingly more ironic when the gameplay itself is stuck in a time when they were considered revolutionary. The game is still clutching at the principles that once made Rockstar’s open world games so enjoyable and groundbreaking but refusing to adapt and grow to meet the expectations set by other games in the genre. It’s a case of the game ignoring the message it’s communicating in a sort of “do as I say, not as I do” paradox, either ignoring or failing to understand the message they’re putting out into the world. Just as Dutch and Arthur are stuck in the past, refusing to grow, so too is the gameplay of RDR 2.

Ludonarrative irony (I’m getting mileage out of the phrase) doesn’t break RDR 2. Far from it in fact. I’ve played the game for dozens of hours and I’m looking forward to playing even more. It just creates an uncanny valley for me. I battle to take the narrative seriously when it seems the people who made the game itself missed the point they were trying to make. Which is a shame because RDR 2 has some of the best dialogue and scene writing I’ve seen Rockstar produce. It’s just hampered by the gameplay totally misunderstanding the themes it’s trying to convey. The story itself holds a great deal of narrative potential and excels a lot of the time. But the second a cutscene ends and I have to flip through several pages in a catalogue just to buy shotgun shells, it kind of rings hollow. 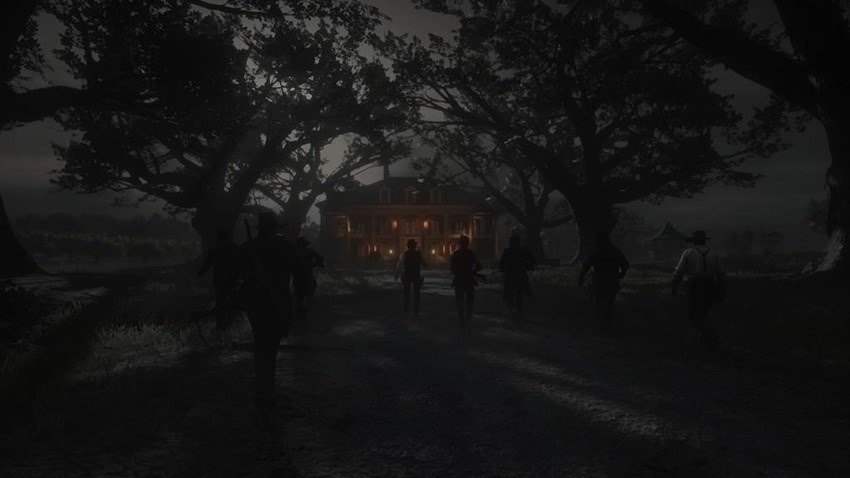 Perhaps this is intentional. Mechanics are perhaps the best means to convey a story in a medium as interactive as video games. I’m a firm believer that games like Spec-Ops: The Line were purposely made to be tedious to further reinforce the message it was sending to its audience. Maybe there’s some meaning to be seen in RDR 2 refusing to update its game design and then telling us how dangerous it is to not adapt to the times. Maybe the clunk is to help us identify with the characters. They’re stuck in the past which is mirrored by their unresponsive movement and repetitive shooting galleries!

All I know is that RDR 2 is a giant ironic paradox to me. Rockstar has a supreme talent in crafting intricate open worlds dripping with unbelievable detail that are always a joy to spend a few hours messing around in. It’s just a shame that they can’t see past a formula that has long since been improved.

Or maybe I’m just tired of failing a mission because I used the wrong gun.