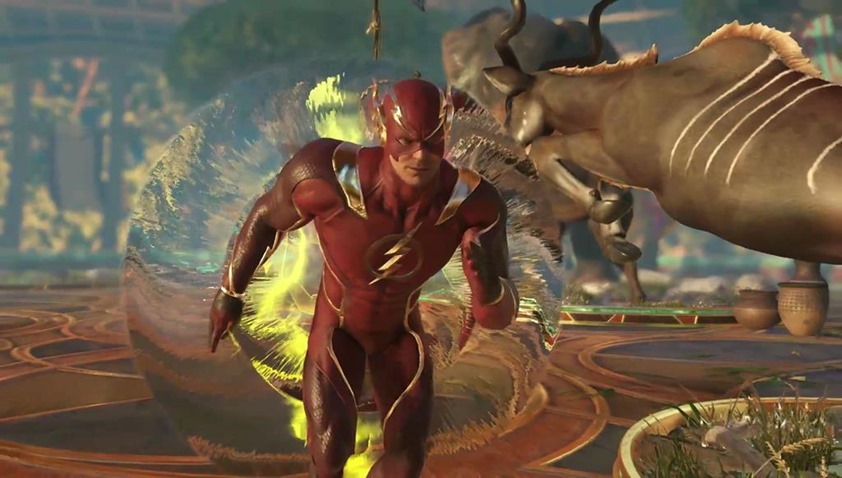 NetherRealm dropped a new trailer yesterday for Injustice 2, featuring one of its many many returning heroes entering the fray and wondering if its possible to get psychic gorilla blood out of spandex. Specifically a trailer focusing on the fastest man alive, the Flash. Unless the Reverse-Flash is in this game as well. Or Zoom. Or Savitar. Or Steamroller-Man.

The Flash pretty much operates in exactly the same manner as he did in the first Injustice: Speed-heavy combos that actually land with the lag of a massively-pinged internet connection in Call of Duty, with his special ability allowing the player to slow down time long enough to get some extra licks in. All well and good, but the icing on this Speed Force cake is the Flash’s ultimate move, an attack that very much asks you to check yoself before you wreck yoself. Check it out above, it’s kind of glorious. Time-travelling repercussions be damned by a bitchy Speed Force, that’s just an imaginative and delicious way of killing two Grodds with a single slam. Somewhere out there, the writer of TimeCop is having an aneurysm at this blatant diregard of never interacting with your past self lest you become a horrible mixture of mid 1990s CGI.

Barry’s return in Injustice 2 should provide an interesting narrative divide. He may have sided with Superman when the jerkass of steel started a regime that lasted for five years, but he was reluctant to do so. Last week’s trailer also hinted that Barry might not emerge from the events of Injustice 2 unscathed, or even alive as Gorilla Grodd assembles his new Society to take the fight back to a renewed Justice League.

All while Brainiac watches from the shadows, giggling at the superhero brouhaha below while he strokes his giant head. Actually wait, that’s me. Injustice 2 drops a Martha-bomb this May on PlayStation 4 and Xbox One.