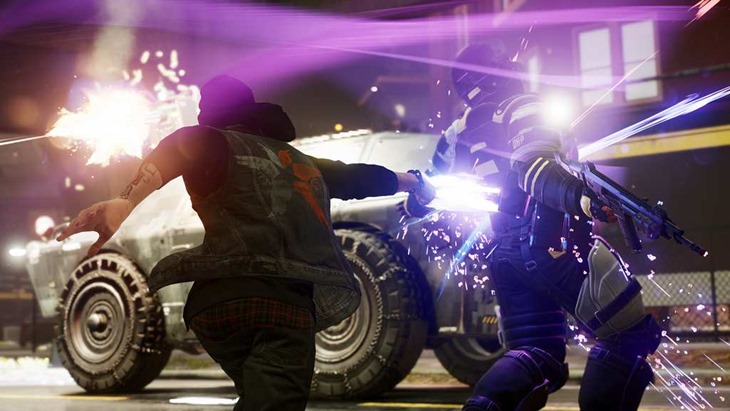 Second Son is polished and refined enough to make previous series entries feel dated in comparison. It represents a great leap forward both in terms of gameplay and in graphical fidelity, and establishes a high standard for what players can expect from the PlayStation 4.

. Gorgeous, and instantly satisfying to control, inFamous: Second Son shimmers across the screen in a way that simply wasn’t possible on PS3. The core missions lack sparkle, but this sandbox yarn is heroic in full-flow.

It gives you everything the best open-worlders give you, too. The orb collection gameplay loop of Crackdown, the aerobatic thrills of Assassin’s Creed, the world map with its districts and attached percentages denoting how many of the ‘Things you have Done’, yearning to be brought down to zero, the cutscenes to justify it all. Right components, all present.

As pretty and playable as it is, in no sense is inFamous: Second Son a post-Grand Theft Auto 5 open-world game. It’s just a tidier, shorter and shinier one. It’s easy to enjoy and has a winning personality, but it’s reluctant to deviate from a stale streetmap of game city. It’s no rebel, then. In fact, it’s a conformist.

Second Son focuses on pure enjoyment. It communicates that through the excellent combat that forces you to concoct crazy tactics to overthrow the invading forces. It draws you in further through its incredible visuals that not only hint at the PlayStation 4’s impressive power, but employ a sensible artistic touch that makes Seattle a place you want to explore

Second Son is by far the best inFamous yet. If you’re a fan of the series, then checking this one out is a no-brainer, and if you’re not, consider jumping in with Delsin. You don’t need any prior knowledge of the franchise to do so, and if you have any appreciation of open-world superhero games, you’ll enjoy it.

Open-world superhero action games are about freedom and empowerment, and in these regards, Second Son is really impressive. Seattle is a big, beautiful playground for you to stomp around in with a set of devilishly fun and powerful toys at your disposal. It plays great, and it looks even better, but its advancements also beg it to be held to a higher standard, one that its overall story and morality systems struggle to reach.

Infamous: Second Son wears its rebellious heart on its sleeve. Brimming with attitude, unrelenting and massive to take in, the game never forgets the most important aspect of game design however, and remains consistently fun.

The general consensus is that it’s a pretty good game..now if you’ll excuse me, I’m off to play the game myself.