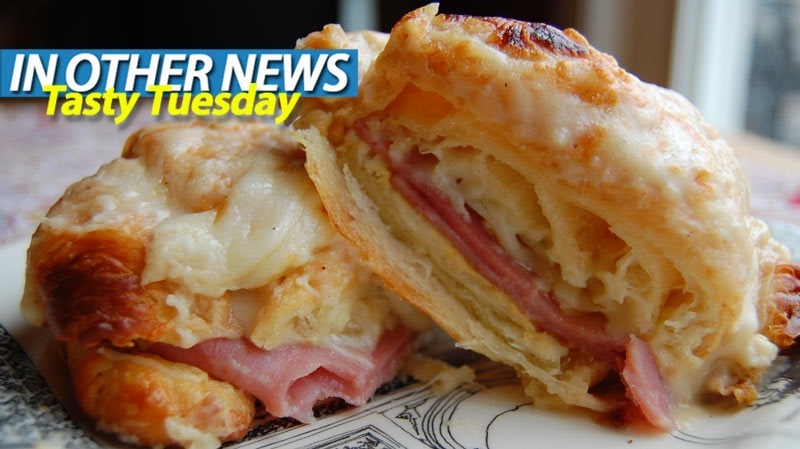 The sandwich – a filling nestled betwixt to slices of bread – is named after John Montagu, 4th Earl of Sandwich. Legend has it that the earl, a prominent gambler who luncheoned regularly on meats and bread was too preoccupied with his cards to do so – and requested from his servants (as the obnoxiously wealthy do) that they slap the meat between bread so he could conveniently eat whilst gambling. And thus, the sandwich was born. Of course, the idea that he was the very first to put something between bread is ludicrous; sandwiches have existed in one form or another since man’s been making bread and killing himself with glutens.

Toasted, the sandwich becomes even better. There are none quite as exquisite as the Croque-monsieur, a staple of Parisian sidewalk cafes in the early 1900’s. Yes, it’s little more than a fancy grilled ham and cheese sandwich – but it’s heavenly. Ham, a little béchamel sauce, some sharp Gruyère and you have a bit of grilled perfection.

In Other News: Iron Banner returns, Escape from an Indian prison and life is, indeed, Strange.

Here’s the news we didn’t post because we weren’t eating cauliflower with everything.

How I got one of the world’s last 20th Anniversary PS4s
Survarium could be a worthy Stalker successor if it gets the balance right
Well, this kid will never sleep again
Whatever the decade, Archie remains ‘a character rooted in the present’

This new trailer for season 2 of Penny Dreaful will never leave you
The Flash cast and crew reveal the identity of the Reverse Flash, tease upcoming episodes
The CW considering an Atom spin-off, confirms animated Vixen series
Star Wars Rebels is about to get a lot cooler
Don’t shoot The Messengers in this first trailer
Win double tickets to WW2 tank movie Fury!
This trailer for iZombie is pretty (and) grim
This new trailer for Avengers: Age Of Ultron is going to tear you apart