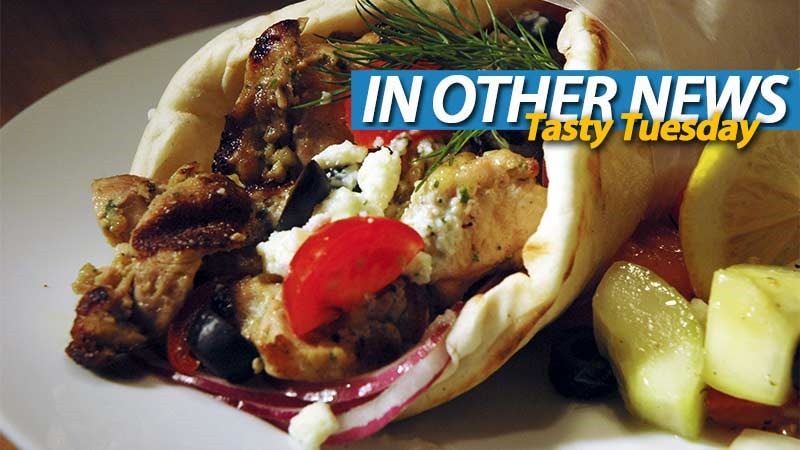 Summer is pretty much gone, and in the next month or so the cold will creep in, eroding away at your happiness. For a brief while, you can still pretend its warm, by sitting out, staring at the sun, drinking a glass of white wine and imagining that you’re sitting on a balcony, overlooking Santorini. You’re not though.

To make the illusion a little more real, why not stuff your face with one of the best street foods to come out of Europe, the Yiros (or Gyros, depending on who you’re talking to). Essentially Greece’s take on a Schwarma or Doner, the Yiros has flavoured vertically roasted meat, tomatoes, onions, oregano and a healthy dollop of Tzatziki (and perhaps some feta and a handful of olives) all rolled up in a flatter, puffier sort of pita bread. In the mid to late 90’s, when I used to spend a lot of time in Cape Town, I used to gorge on the things from a little spot called Ari’s Souvlaki in Seapoint, which I’m led to believe, is still around.

In other news: Halo’s leaking, play with some shiny Star Balls, Woah! Woah Dave is free and it’s your last chance to get Nintendo coins.

Here’s the news we didn’t post because we’re still waiting for a review copy of Double Dragon on the Neo Geo.

Future Assassin has murdered all the wallpaper
Woah Dave! will be secretely free for PS Plus subscribers in April
Eight Steam features that you probably didn’t know about
Inside EVE Online’s Game Of Thrones

Mulan is the next Disney live-action adaptation
Maisie Williams to guest star in Doctor Who
The Freddy Mercury biopic is back on track
Brace your boobies for this first trailer for Masterminds
There is no god in this trailer for Into The Badlands
New trailer and plot details for “reimagined” Terminator: Genisys
Ster Kinekor to open up two more IMAX cinemas