At one point early on during Batman Ninja, the Dark Knight scowls and mutters, “This is madness.” That pretty much sums up Batman Ninja, the latest film from the DC Animated Movie stable. This entirely Japanese-made production features stunningly inventive character and world designs, but it’s unlikely even that will distract you for long from the utterly ridiculous plot. 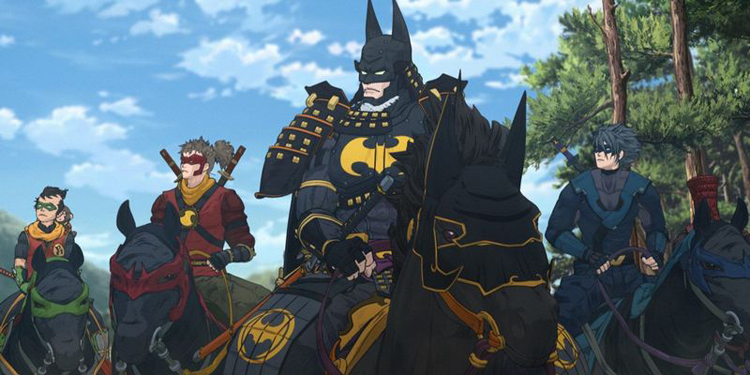 How ridiculous? Well, the story sees Gorilla Grodd up to no good, resulting in Batman (voiced by Roger Craig Smith), along with several of his allies and the inmates of Arkham Asylum, being transported through time and space to feudal Japan. In a blink, the villains are battling each other for control of the country… by fighting each other in robot castles. Meanwhile, an eerily chipper Damian Wayne Robin suddenly has a cute monkey sidekick who can summon all the other monkeys in Japan to make a converged giant super-simian, the other Robins look like they stumbled out of Final Fantasy, Batman masquerades briefly as a Christian missionary with the bat symbol shaved on his crown (naturally), and Bane is a sumo wrestler.

Now, the Caped Crusader being given the anime treatment is nothing new. Batman: Gotham Knight came out in 2008 to bridge the gap between Christopher Nolan’s Batman Begins and The Dark Knight, in much the same way The Animatrix delved anthology-style into the lore of the Matrix franchise. 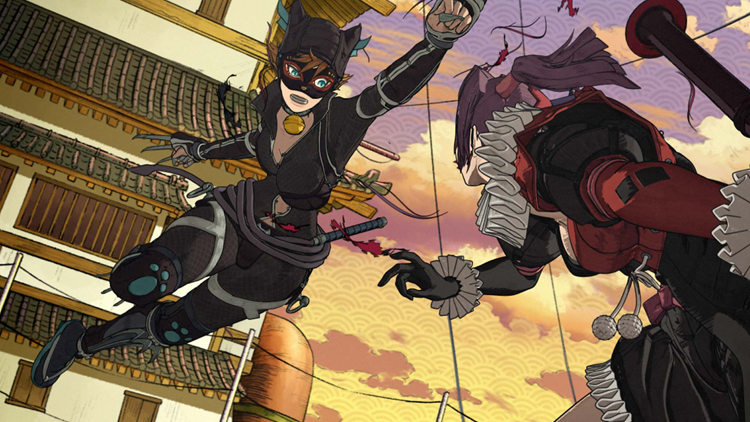 Batman Ninja, however, is unfettered by any association – and that comes through strongly, for better or worse. It’s one of those movies that has to be seen to be believed, because it is so insane. When it comes to tourism, the Japanese have the habit of presenting what they think Westerners want to see of their culture, and Batman Ninja seems to have been scripted according to that principle. It’s like a half dozen different anime blended together, with every single cliché thrown in the pot for good measure. (Watch the trailer here).

For the record, though they feature the same visuals, the Japanese and English-language scripts for Batman Ninja are reportedly different. The DVD plays the English dub automatically but the Japanese version (with English subtitles) is also accessible on the disc. 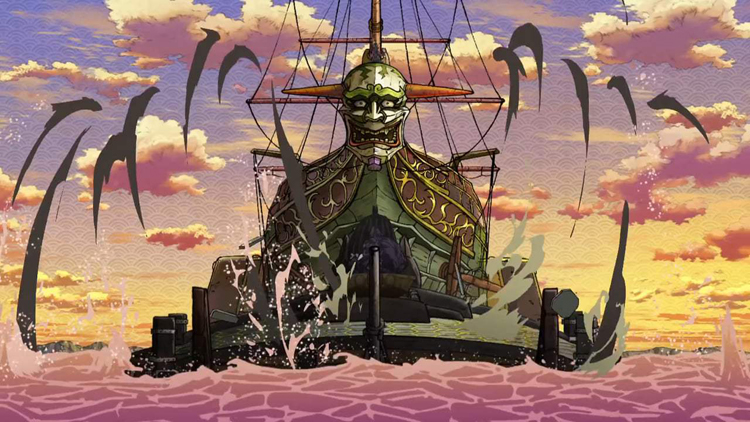 Either way, the amount of enjoyment you get out of Batman Ninja will probably depend on how you respond to style over substance (or how high you are while watching it). The film is unusually acclaimed on Rotten Tomatoes, with most praise going the way of the film’s visuals. And absolutely, Batman Ninja is graphic genius. Takashi (Afro Samurai) Okazaki acted as character designer for the film, and his reimagining brilliantly meshes Japanese cultural iconography with the established looks of Gotham’s heroes and villains (which makes for some super-stylish and expensive figurines, by the way). The same goes for the overall art direction, even when it veers off into hallucination-like ink washes for a portion.

But Batman Ninja is just so damn committed to weirdness. As a long-time Batman fan, it’s frequently frustrating as overblown anime oddity becomes a priority at the expense of the characters. Forget Damian’s weird off-key portrayal. Batman, too, suffers. He frequently just stands around, and is repeatedly bested by the Joker because of his stupidity. World’s Greatest Detective, this Bats is not. 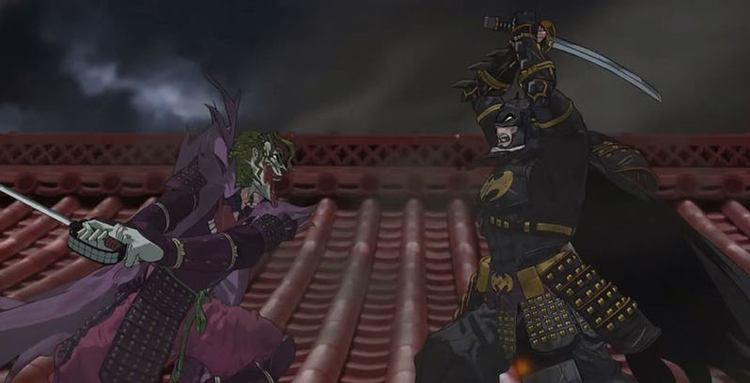 Also, Batman Ninja is pretty much the Batman-Joker show (with Catwoman and Harley Quinn in tow). It’s an exceptionally overstuffed 85 minutes, with Batman’s Rogues’ Gallery pretty much just making an appearance to flash their sexy new character designs before vanishing again. Batman Ninja also doesn’t bother to explore its world at all. The feudal Japanese seem quite content to live under these colourful foreign freaks, and the local clan of Batman-obsessed ninjas is just present as cannon fodder. The film really is superficial nonsense all the way.

Then again, that may be the appeal of the movie to some. Like watching, say, Jupiter Ascending, they’re only there to see how crazy things can get. For this kind of viewer, that may be enough. For anyone else, they’ll sorely miss a coherent plot. Batman Ninja is visually striking but it’s denied being remembered as anything truly special because of its story neglect. Instead, you can probably just file this one alongside Batman & Robin in terms of bad-yet-compulsively-watchable Bat movies.