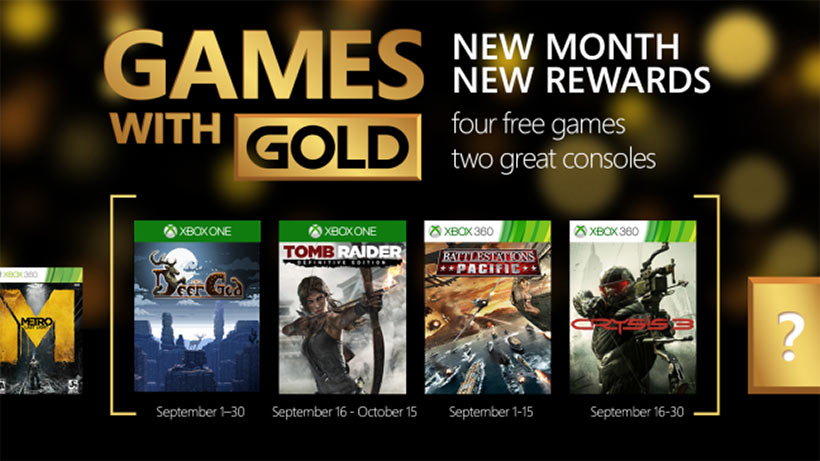 Sony’s PlayStation Plus Instant Game Collection is, I think, pretty strong next month – with Grow Home, Super Time Force Ultra, Xeodrifter and La-Mulana shining particularly bright. That said, it’s not the sort of stuff that’s instantly appealing, and PlayStation Plus is going to have to pull out all of the stops for October, or risk being overshadowed by Microsoft’s Games with Gold.

Once again Microsoft’s “free” games are showing how it’s done – by giving away full retail games. This time, the games in question include the rather exceptional Tomb Raider: Definitive Edition, perfectly timed to drive interest in the imminent, timed exclusive sequel, Rise of the Tomb Raider.

That’ll be available to download halfway through September for Xbox One Users. Before that though, they’ll be treated to The Deer God, a pixel-art platforming adventure game.

“The Deer God is a breathtaking 3D pixel art adventure that will challenge your religion and your platforming skills. It’s a game about survival, reincarnation, and karma; all set in a breathtaking and unique 3D pixelized world.”

On the Xbox 360, gamers will get Battlestations Pacific, a real-time tactics war game and later on Crysis 3, proving that the system can, indeed, run Crysis.

It’s really not a terrible selection of games at all, and though PlayStation Plus has given me a bucketload of games that I’ve fallen in love with, but would otherwise not have given a second glance, people seem to really be more bowled over by retail releases.

What do you think of next month’s Games with Gold?