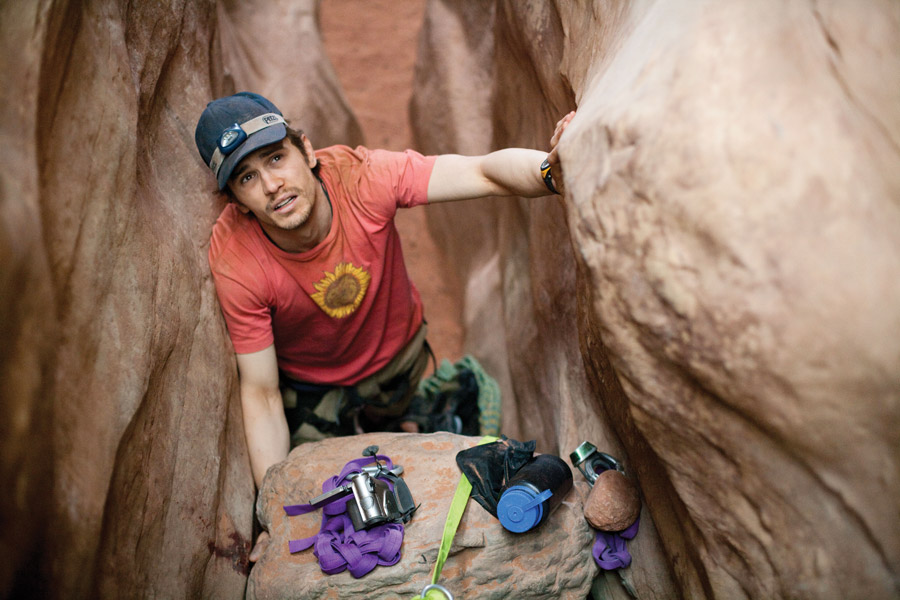 Today, we’re talking a horrifying moment that came out of a not-horror movie. Body horror moments seem to pop up across a multitude of film genres, and while they all have varying levels of grossness, occasionally there comes a scene that gets elevated past just regular gore and into the realms of sheer, under-your-skin terror.

By telling you the film, I’m sure you already know which scene I’m talking about! If you’ve never seen the film, 127 Hours is based on the true story of what happened to mountaineer Aron Ralston on a solo hike in Utah. During the hike, Ralston (portrayed by James Franco) gets trapped by a falling boulder after attempting to climb through a slot canyon.

And by trapped, I don’t mean he’s blocked from exiting. Ralston’s right hand and wrist get crushed and pinned to the canyon wall by the falling boulder. In immense pain and unable to shift the boulder, Ralston starts to ration his food and water while looking for a way out.

The name of the film, 127 Hours, is the length of non-stop activity from when Ralston woke up on the morning of his hike, to when he was put under anaesthesia during his rescue. And how did he get out of the canyon? Well.

Keep in mind that Ralston himself has said that the film is “so factually accurate it is as close to a documentary as you can get and still be a drama”. So, what you’re about to witness is almost exactly what someone went through. Serious big warning for this video. It’s gross.

After five days of futile attempts to shift the boulder, Ralston is hallucinating and close to death. His pulley system failed, his pocket knife is dull and he’s run out of water. In a desperate attempt to just get out of there, Ralston makes a tourniquet out of tubing from his hydration pack and, ever so slowly, cuts his arm off.

I repeat, he cuts his arm off. With a dull pocket knife. Slowly.

After watching Ralston’s descent into despair and hopelessness, and, armed with the knowledge that this is his last chance, we’re shown the process of emergency armectomy up close and in detail.

First, he twists his body and uses his weight to break the arm so that he has somewhere to cut through. If that wasn’t squicky enough, Ralston proceeds to dig his tiny, dull pocketknife into his arm and just… go to town. On himself.

As the scene goes on, the tension from the music heightens to a point that is almost unbearable and, when it comes to severing the main nerves in his arm, the music is getting so sharp that it doesn’t matter if you’ve turned your head from the screen, you know exactly what is going on. And you can feel Every. Single. Slice.

By the time it’s over with and Ralston has dropped to the canyon floor, you feel like you’re the one that’s gone through field surgery. That scene is utterly exhausting in how terrifyingly personal and traumatic it gets.

That’s what makes a good horror scene for me. Never mind being scared, 127 Hours makes you feel like you’ve just lived through amputating your own freaking arm. Frights don’t need to come from the realms of fantasy when you have real-life experiences that make everything else pale in comparison. Pale from blood loss, anyway.